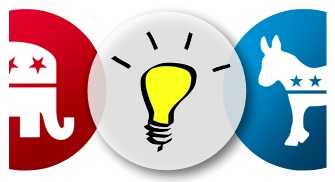 Here’s a question for American ingenuity: How could $6 billion be used to stimulate the economy?

Republicans and Democrats alike answered this way in recent weeks: Spend it on television for bad political advertising.

More than $6 billion was spent in the 2012 election, making it the most expensive and wasteful in history. The irony is that a central theme of the campaign was responsible spending in a challenged and turbulent economy.

Business leaders who contributed millions to American Crossroads, the pro-business Super-PAC that backed Mitt Romney, are asking what they got for their money. How could it spend $300 million on mangled messages that insulted the intelligence of citizens, turned off voters and failed to sway the election? Now, days after the presidential campaign, we’re left to consider questions that take us closer to a financial cliff.

Who are the bigger fools?: The wealthy partisans who contributed millions to dark Super PACs to misjudge and distort the presidential race? The leaders of both parties who, historian David McCullough said, shamefully spent an unconscionable amount of money for a bad show? Or us?

Our legacy as innovators and capitalists are at stake. We can no longer afford to trust the cynical messages of a broken political system. One way out of the box is to innovate the way we finance and conduct our political campaigns.

Go back to that question again: How could $6 billion be used to stimulate the economy? Here’s one idea: think of political campaigns as entrepreneurial investments instead of cynical arguments. Turn Political Action Committees into Economic Action Committees (EACs)

EACs would seek investors rather than donors. They’d recruit citizens with a stake in the economic success of our nation with the goal of participating in the political process to launch new businesses, create revenue and jobs, and advocate necessary changes for the business landscape Contributions formerly made to finance campaign ads on TV would, instead, be used to create investment funds. The investors would set terms and advocate a political-business agenda for job creation, tax structure or economic policy. Candidates could align with the interests of an EAC and “approve this message.” If elected, they would be accountable to their constituents as well as the investors.

Economic Action Committees could be established at all levels of government — local, regional, state and national. They’d serve as private-pubic partnerships for entrepreneurship and economic development.

There’s another seismic shift shaping this idea: the transformation of advertising. For money to flow to EACs instead of PACs, contributors, candidates and political parties would have to participate in the shift to social media as the principal vehicle for political advertising. All advertising is going social. At its current rate of growth, social media will crush traditional advertising on local television and national networks by the 2016 elections.

Candidates and political parties can utilize social media channels such as You Tube, Twitter and Facebook to distribute more human stories about the candidates and their positions. They should look to commercials like Embrace Life an advocacy video on seat-belt usage praised for its intelligence and emotional impact. Made for the Internet by the Sussex Safer Roads Partnership in Britain for $72,000, Embrace Life has been shared and viewed 15 million times without the expense of TV distribution.

Like the local partnership in Britain that created Embrace Life, EACs could be vehicles for making and spreading powerful social, human and political messages in the public interest. The Obama campaign gave us a sneak peak on Election Night 2012 with the posting of “The Hug” at the moment the president was declared the winner. The “most-liked” photo in history was seen 3.5 million times on Facebook and retweeted 700,000 times from Obama’s Twitter page within hours. The cost: virtually nothing.

That’s the shape of things to come: increasing use of social networks and social media to spread the word inexpensively, build affinity, craft messaging, share with supporters, organize and grow audience. Frequency and reach — the two of pillars of advertising on legacy media — are already achieved more effectively and less expensively through social media as citizens connect with messages on the ubiquitous devices they carry everywhere.

The television campaigns from Super-PACs, a failed investment in 2012, are an even worse idea for a nation spinning toward 2016. We just can’t afford to let creepy, political committees characterize Americans as lazy victims. Let’s put the next $6 billion to work in a campaign that tests our ingenuity and produces a return on our investment.

Send us other ideas. We’ll share them and see where they lead.