A video shows what happened, but doesn’t explain it

A security camera takes us behind-the-scenes and into a stranger’s private space, a place we are not supposed to see. Or are we? This provocative exposure of surveillance culture offers a fleeting glimpse of fundamentalism, sexism and tribalism in America. A video shows what happened, but it doesn’t explain: the shame and thrill of spying, the electricity of colliding worlds, the transition from home to not-home, from one identity to another. — Andrew Nachison 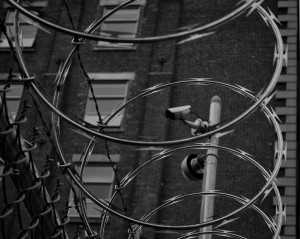 Within the matrix of security footage in my apartment building in south Williamsburg, one camera has captured something that my doorman insists I watch. “It happened five minutes ago,” he says, scrolling through the footage to 2:57 p.m. “This is the craziest thing I have ever seen.” The camera feed shows the back entrance of my building, where tenants lock up their bikes. A white van is parked there.

On cue, a Hasidic woman hustles into the lot, alone. She takes cover behind the van. With premeditated efficiency, she undoes the scarf wrapped around her head, revealing the perfectly coifed, ubiquitous shoulder-length wig that renders all Hasidic women anonymous to a layperson like me. Next, off comes her equally anonymous ensemble, the long-sleeved black cardigan and the ankle-length black skirt. She rolls all of her black garments into a little black ball, paying surreptitious glances about her surroundings.

It’s not that she’s unduly exposed herself; underneath her modest black outfit, she’d been wearing a long-sleeved blouse and a pale pink skirt ending just at her knees.

Someone else comes into view in the footage, a man who lives in my building. He mounts his motor scooter and straps on his helmet, paying little mind to the Hasidic woman, having entered this narrative in medias res. Likewise, his presence seems irrelevant to her as she continues her transformation with haste. She pulls off her closed-toe black shoes and reaches into her satchel for a pair of unadorned white flats.

It was neither nudity nor the inherent intimacy of undressing that animated her quick change, her nerves. I can speculate that what she feared was to be spotted by one of her Hasidic counterparts; whether by a man or woman, I don’t know what would be more dreadful to her. I gather she was younger than I, perhaps recently married to a man that she felt she might not ever love. Maybe she was on her way to catch a forbidden matinee alone at a movie theater, or wanted to sit in solitude alongside the East River, warming her bare shins without judgment, away from the Williamsburg that has been confining her to a prescribed existence. Or, for a saucier tale, maybe she was a Capulet waiting for her Montague.

She smooths the hairs of her wig back, securing it into a low ponytail, then takes a moment to compose herself.

Across the street, there’s a popular, hip restaurant full of braless women with wild, wind-blown hair and glossy red lips. But none of them feel as electrified as this woman now, who walks out from behind the van and leaves the backlot of my building looking like a secular version of herself, something like a librarian, a war-time nurse from another era, a wallflower.

Her radical wardrobe will go unacknowledged on this day by any of us, and I imagine that’s the way she’d like it to stay.

A version of this appeared in Metropolitan Diary, a section of The New York Times.

Kat McCue is a writer from Brooklyn and author of the blog Williamsburbia.