An app for 9/11 also explores the future of books

Designed for the 10th anniversary of the Sept. 11 terrorist attacks, a new iPad App explores the history and future of the World Trade Center.

For story-tellers and publishers, the app from filmmaker Steve Rosenbaum and developer Jeff Soto of Tendigi also explores new territory and a new template for digital books – in this case, a collection of stories told mainly through video. 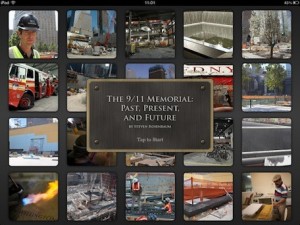 Better known as the Twin Towers, the skyscrapers of the World Trade Center became an iconic symbol of New York City when they were completed in the early ’70s. They dominated the skyline of lower Manhattan and gave substance to the city’s unabashed conceit as the greatest on earth. For the past decade, they have also symbolized the nation’s worst terrorist attack, the rubble and crater where the towers once stood a gaping void in the city’s and nation’s psyche. Now, construction of new skyscrapers is under way, along with an underground museum and outdoor memorial designed by architect Michael Arad that will formally open to the public on Sept. 11, 2011.

Rosenbaum’s digital story of the World Trade Center is an app in the sense that it works only on the iPad. The story itself is told mainly through videos collected from a variety of sources, along with photo galleries, a smattering of explanatory text and a timeline. The format is especially well suited for the videos. A book full of videos – that’s a new kind of thing and it’s engrossing, like a good book. Unlike a book, the app experience has no beginning or end. That’s “non-linear” in geek speak. There’s no right way to “read” it.

The app will be available in the iTunes store Sept. 1, where it will be free until Sept. 12. Then the price will be $9.95. Click here for more about the app.

Creator Steve Rosenbaum is an old friend and longtime participant and contributor to We Media. He’s also the author of the recently published Curation Nation and founder and CEO of tech startup Magnify.net.

I asked Steve to share some insights into how and why he took this approach with the 9/11 anniversary.

Q: How did you build it? Literally – what tools did you use?

A: I knew I wanted to create something different. A ‘book’ that you could read, or a series of photographs that you could explore, or a collection of videos you could watch. And I knew that this story would have different audiences that would want to explore it in their own way, from their personal point of view.

So I sketched out the user interface on paper, and then downloaded wireframe elements for Photoshop. From there, I designed and created a working blueprint of the UI.

Once I’d come up with the idea of Past, Present and Future as the overriding navigation – I added a Gallery feature so that users could go deeper in either video or photographs, and a timeline so that readers who wanted a linear history could find that in the app.

Now, I’m a writer and a photographer, and a filmmaker – but I don’t write code. So I went out looking for a developer who’d work with content apps before and had a real love of the iPad look and feel. I found Jeff Soto at Tendigi – a development shop that is deeply rooted in Apple i0S development. He was able to bring a project plan and a development timeline, and in addition to writing the app, his team did a great job created the graphic elements that make the App’s UI easy to engage.

So, I did the wireframes and pulled the images and edited the videos and the Tendigi team wrote code, and turned my sketches into pages.

The content came from the work I’ve been doing at the WTC site for the past 5 years. I have almost 22,000 images, and 300 hours of video. I’ve been covering the story since it 9/11/01 – and so I’ve been able to develop amazing relationships on the site and with many of the key participants.

I’ve been shooting in HDV -in a dual system that records to Compact Flash Memory cards and HDV tape on a Sony HVR Z5U HD camera. I’ve got 14 terabytes of storage to back up the cards, and then the tape provides a secondary backup. For the stills i’m shooting on a Canon 7d.

The important thing to know is that this App is an early take on the subject, and I’ll produce a feature length documentary once the National 9/11 Memorial Museum opens in September 2012.

A: As a filmmaker, you mostly get to choose your subjects. But the story of the 9/11 Memorial really chose me. I’d made 7 Days In September and frankly thought that was all I wanted to do on the subject. But as the site was cleared, and then the designs became public, I found that I was drawn back to the site again and again – trying to understand what was being built and how it could possibly fill such a terrible loss. When I saw architect Michael Arad’s designs for Reflecting Absence – I knew I was going to follow the story until the site construction was completed.

Now it’s been five years – and I’m proud that the remarkable team at the 9/11 Memorial and Museum have allowed me into their world. Day in and day out – the work they’re doing is demanding, complex, and important. What they’ve built on the Plaza is elegant and powerful. It honors those who lost their lives, while at the same time embracing life and offering the city a space that will help return lower manhattan to the city. Underground, the Museum under construction will i think suprise even jaded New Yorkers with its complexity and it’s throughout history of the events.

A: Building an app wasn’t a forgone conclusion. I knew I had a unique collection of editorial elements, text, video, and photographs. My first thought was an eBook – but the more I learned about the format the more I understood that it was primarily a textual format with video and photo’s as an add-on. The Kindle, a device I love, wasn’t going to make it possible for me to share the media elements the way I wanted to. Sure, I could have built for Android, or even for iPhones, but I wanted to be on the iPad first, and given the tight timeline, I had to make a choice. The iPad has a 30 million unit footprint, and that’s around the world. I know that 9/11 is a world story – so it seemed like the right platform.

I wouldn’t say it was an experiment. For me it was an evolution. I’d just had my first book come out – and having it in stores as Borders went out of business reminded me that the evolution from physical books to digital books was well underway. Yes, I could have done a photobook, but then I wouldn’t have been able to share my video – which I think is pretty important for this project. So I was ready to do a digital project, and the App format was the best fit.

Q: What did you learn with this project?
A: I’m very much used to telling stories from beginning to end. Taking the reader by the hand and going on a Journey. But 9/11 is a story where doing that is likely to turn off as many readers as it engages. If you were 12 years old in 2001, as my older son was, you don’t need to see the ‘day of’ video ever again. You lived it. But if you’re my younger son, who was four years old on 9/11, then maybe you need to see the day to understand what happened – how the sky turned dark as night in the middle of the day.

Giving readers the material to take their own journey is a leap of faith – it’s in some ways harder than a piece of linear narrative. Because you have to trust the reader to engage, and explore, and find their way out of the story. Not all readers will do that – but I hope many will.

Q: What do you want people who use the app to learn or feel or do?

A: The Memorial is in some ways deceptively simple. Big empty sky where the buildings once stood, massive voids where the footprints where. Arad’s design is complex, and the story of how he conceived of it is remarkable. So getting to meet the architect, and listen to him tell the story in five, six, even seven minute segments is something I hope people appreciate. No news story, or even documentary film would be able to let him tell his story this way. I want people to come away from the app understanding what was built, how it came to be, and why it is in many ways a triumph – it is something New Yorkers and Americans will be proud of.

A: The app is most certainly not about 9/11. If fact, probably less than 10% of the app covers the day of 9/11. It’s about the 10 years, the construction, the memorial, the artifacts. It’s about the future, not the past. And it’s a future that I think has the potential to be looked at as an effective and emotionally pitch-perfect project. If you can visit the site, the app can service as primer that helps you understand the site and get oriented. If you want to visit, but can’t make the trip – then the App is a way to answer the question: “what did they build at the WTC site” and give people a hands-on understanding of the Memorial.

Q: How does a tech startup CEO find time to write a book, make a documentary and build a mobile app about the nation’s greatest crisis in half a century?

A: Well, the book I wrote, Curation Nation, is about the emerging practice in editorial of organizing content in to a coherent narrative from multiple sources. Happily, that’s what Magnify.net does – so writing book that helped me understand the field that I need to both understand and lead. The app too is curated – there’s content from the construction of the Twin Towers from YouTube, and links to news sources and blogs in the Timeline.

The video in the app is powered by Magnify.net, so for me and my team – learning how to build an app with video that was embedded, powered by our platform, and able to be updated from a web interface was a great piece of learning.

I think for a CEO of a company that makes a software platform for curated content, staying active in curated content is very much part of my job. Curation isn’t something you learn on paper, you learn it by doing it – anything less is just theory. I wanted to put curated video for apps into practice. And we did that.