Another slant on the news. But how true?

True/Slant, an “original news content network” by “new journalists” (which, in this case, are displaced journalists; apologies to Tom Wolfe), has launched in “open alpha,” which apparently means “very rough; no revenue.”

“News is more than what happens (an old newspaper aphorism),” say the founders, former newsies at America Online who worked at a variety of publications, including The Wall Street Journal. But initial content on True/Slant — stories from 65 contributors (they call them “knowledge experts”) on topics they like, not-so-original headline grabs, and very little conversation among the contributors and audience — doesn’t inspire yet.

Could be me, but what’s really new here? The storytelling metaphors are familiar. Content is the same old, same old. Well written, but common. The sauce of social networking doesn’t make it special.

Why should I care? What’s the point? What’s in it for me and other news sniffers? Beyond the clever new terms and titles for old roles, where’s the Aha!?

No less than Walt Mossberg thinks it lies in merging journalistic entrepreneurship with new forms of advertising and blending them with social networking.

Journalists are paid a small amount. The plan is to turn them into contributory co-publishers who receive equity or a share of the advertising, sponsorships, or traffic their individual pages generate. And they’re expected to respond to comments (oh, my!), as well as comment on the work of fellow contributors.

The new revenue model is the old one: advertising. The kinda new twist is that advertisers get their own pages where they can publish blogs and try to attract a network of followers. These will have the same design and features of the journalists’ pages, but will be labeled as ad content. For the sake of acquiring advertisers, I hope they’re more compelling than the journalists’ pages.

True/Slant is worth watching as a hybrid model that applies transitional conditions to news on the Web. But I think we’re going to need more than another news destination with a clever phrases and incremental thinking. Bring on the Beta and inspire me.

Below: The True/Slant team. That’s Lewis Dvorkin, the founder and CEO, on the left. Dvorkin was formerly SVP of programming at AOL, and previously exec editor at Forbes magazine. 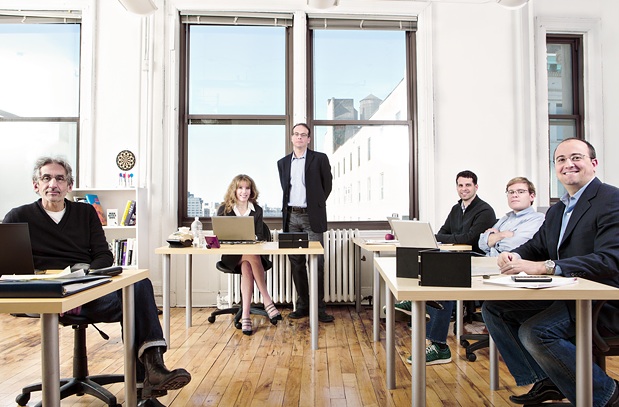