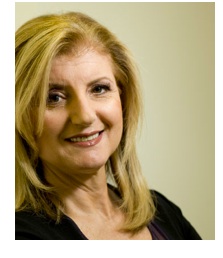 The courtship began innocently. Ms. Huffington and Mr. Armstrong came to know each other on the media conference circuit last fall. “We were practically finishing each other’s sentences,” she said. How nice.

Romance bloomed quickly. Ms. Huffington acknowledged in a blog post that Mr. Armstrong e-mailed her last month “saying he had something he wanted to discuss.” The next day over lunch at her house, Mr. Armstrong offered to buy The Huffington Post.

Living well is the best revenge
I can assure you that lunch at Casa Huffington is an affair to remember. I was once a guest, actually the guest of a guest, at a reception at her stone mansion in Brentwood — part of her divorce settlement from oil mega-millionaire and one-time Republican Senate candidate Michael Huffington (Huffington the Lesser).

“Welcome to my home, please call me Arianna, and have you met Bill Maher yet?” Her Huffingness greeted me. She neither knew me nor had invited me, but seemed genuinely pleased I was there.

There’s a reason Ms. Huffington has been called “the most upwardly mobile Greek since Icarus.” The Huffington Post was hatched at another of Ms. Huffington’s house parties shortly before my close encounter with the rich and famous. Former AOL executive Ken Lerer, who professes to hate parties and to barely have known Ms. Huffington at the time, also came to call at Casa Huff. Over the next year they hatched an idea: a liberal counterpoint to the right-wing Drudge Report.

“For about half an hour it was called the Huffington-Lerer Report,” Mr. Lerer told Time. “But I’m shy.”

Ms. Huffington is not. Together they raised one million dollars for a left-leaning website with guest blogs, wire-service links and attitude. Who knew it would yield 300 times the initial investment without showing a profit?

Friends, tribes and traffic
Leveraging its namesake and Ms. Huffington’s A-list of friends, HuffPo has grown in into one of the most heavily visited news sites in the country. It approaches The New York Times in traffic, 26 million to 30 million unique visitors a month, as well as in influence. It does so at a fraction of The Times’ investment in news coverage. Rather, HuffPo relies on tribes of celebrities and bloggers, most of whom are unpaid. It liberally links to the rest of its content. Its editorial staff of about 80 people pales in comparison with The Times, which employs more than 1,000 best-of-breed journalists.

HuffPo succeeds as a triumph of personality over content, more a raucous cable TV talk-show than a discerning news site. Mr. Armstrong has wooed the master of the format to AOL with $315 million to manage low-cost content at a company that has historically bungled it at any price. He reasons that The Times stands to make $100 million annually from online advertising, so it stands to reason that HuffPo will turn into an ATM for AOL with low-cost, high-yield content spewing out of the machine.

The plan? Integrate titles, link to expensive journalism produced by others, feed the free-content blogger frenzy, grab sexy and salacious stuff from other web sites, produce low-cost stories that generate the most traffic, write click-worthy headlines, edit out the nasties and watch Google to craft stories around search terms that are hot.

HuffPo execs say their site will generate $60 million in revenue this year, compared with $31 million last year. But HuffPo has just now claimed profitability, so many experts question those numbers.

The AOL Way
Mr. Armstrong believes he can multiply profit by applying a formulaic master plan called The AOL Way. Distributed to editors, writers and content creators in the days before the HufPo deal, The AOL Way is both a guide and a mandate for “margin-positive content.” The content-for-clicks strategy requires producers to create content at increasingly lower costs, and for editors to make content decisions based on “profitability consideration.” See a leaked version of the document.

Mr. Armstrong is also committed to acquiring more-and-more cheap content as a way to reverse AOL’s decade-long decline. Unfortunately for AOL, but fortunately for those who care about the integrity of news and information, the company never developed an appreciation for content. Not surprisingly, AOL has consistently failed at making a business of it.

At its core, AOL is a technology company built around dial-up access. Its acquisition of Time Warner ended in separation in 2009. It has since struggled with its own news sites such as Politics Daily and Daily Finance. Its hyperlocal startup Patch and citizen-journalism initiative Seed have been criticized as piffle curated by inexperienced or displaced journos who are poorly paid. Mr. Armstrong and Ms. Huffington say Patch-and-piffle will thrive when paired with HuffPo’s reader engagement tools.

Case was running AOL in 2000 when it acquired Time Warner — a legacy media company with print magazines, a film studio and television channels — in a $164 billion deal that is widely seen as one of the biggest media blunders of the past decade.

The HuffPo deal is based on the same ambitions that drove the Time Warner fiasco. The idea is to create an enterprise that reaches more than 100 million visitors in the U.S. each month, the makings of an information empire that could compete with Apple, Google, Facebook and Microsoft. AOL has been looking for ways to bring in new revenue as its obsolete dial-up business fades into oblivion. Millions of Huffington Post readers represent clicks that translate into potential advertising dollars.

Clash of the titans
Mr. Armstrong and Ms. Huffington are pooling their talents for yet another assault on newspapers and broadcasters who have substantial investments in news gathering, production and curation. AOL seeks to fill the void in categories where struggling local news organizations have cut back on reporting. However, the journalism in AOL products is not up to the standards of what consumers get from traditional news sources.

HuffPo, too, has been criticized for its content, much of which is aggregated from other sources and repackaged under hyperbolic headlines or through provocative links. It has recently invested in original reporting and hired experienced journalists from The New York Times, Washington Post and other traditional media outlets. By acquiring HuffPo’s reporting resources, AOL hopes to combat the perception that it is a mill for thin, automated content.

The battle falls to the fearless Ms. Huffington, who at 61 is at the peak of her fire-brand powers. She’s moved back to New York where she becomes president and editor-in-chief of the Huffington Post Media Group, the new entity that will integrate all Huffington Post and AOL content, including Engadget, TechCrunch, Moviefone, MapQuest, Black Voices, PopEater, AOL Music, AOL Latino, AutoBlog, Patch, StyleList and more.

Ms. Huffington is an accomplished alchemist, turning lead from others into her gold. But can the alchemy work for Mr. Armstrong, who values magic over content? His ambitions to return AOL to glory as a Supreme Power makes independent creators on the Internet wince.

The backlash has already begun. Ad Busters is calling on “jammers, creatives and revolutionaries” to stop visiting HuffPo and to stop blogging for Ms. Huffington:

“She built a blog-empire on the backs of thousands of citizen journalists. She exploited our idealism and let us labor under the illusion that The Huffington Post was different, independent and leftist. Now she’s cashed in and three thousand indie bloggers find themselves working for a megacorp.”

Ms. Huffington will, no doubt, deftly handle detractors who try to huff, puff and blow her house down. She’s more a disarming snake-charmer in the classic mold of William Randolf Hearst than an in-your-face social revolutionary like Mark Zuckerburg. She’ll invite you to Xanadu and charm your pants off as she picks your pocket.

Now richer by several hundred million dollars, she no longer needs to. Even Icarus flies in her shadow.