Five questions for Imagination Gap author Brian Reich
May 8, 2017May 8, 2017  by Andrew Nachison

Brian Reich is an author, speaker, speech writer, consultant and political strategist. His newest book is The Imagination Gap. He’s @BrianReich on Twitter and there’s more about him at littlemmedia – Andrew 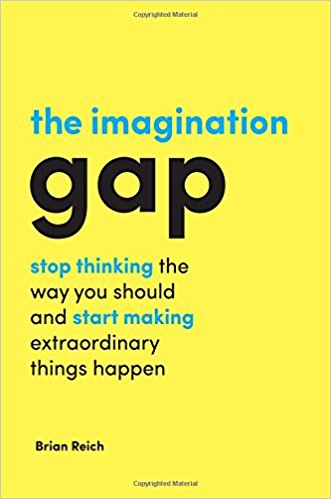 Q. Introduce yourself. Tell me about your interests, what you do, and something personal about your life (like where you live, family … something that isn’t in your generic bio or on LinkedIn)

A. My name is Brian Reich; I’m a speechwriter, author, media junkie and sports nut. I work with media companies, startups, nonprofits, political, and advocacy organizations and other groups – a big focus of mine has been the impact of media and technology on society. One of my recent projects was profiled in Fast Company.

I am also the author of three books. My most recent, The Imagination Gap, takes on the idea of innovation fatigue, and outlines how to get people to use their imagination more.

As for something that you won’t find bouncing around my regular bio … twenty years ago, when I was only 19 years old, I set out to visit every major league baseball stadium — a trip I subsequently named “The Great American Baseball Trip.” My trip lasted some 64 days and covered more than 18,000 miles. In addition to attending a game in each of the 30 major league cities, I visited the Hall of Fame, attended the All-Star Game, and was invited to throw out the first pitch at a Barons game in Birmingham (btw… the umpire will confirm that I threw a perfect strike).

Along the way, I captured the stories and pictures of people who I encountered during my adventure and published them online (a blog before blogging existed, really). I wrote a weekly newspaper column and served as a correspondent for the Sports Fan Radio Network during the trip as well. Today, one of the things I write and speak about is sports – through the lens of culture, society, economics, and politics. I’m particularly interested in the fan experience, the ways that casual fans engage with sports, and how sports fandom influences other aspects of our lives. Along the same lines, I believe ballparks and stadiums are staging grounds for some of America’s most unique and powerful experiences (in fact, I wrote a paper in college arguing that baseball ought to be considered a form of religion). So much of my thinking around those issues was inspired by my trip to visit all the ballparks.

Q. Where did you grow up, what was that like?

A. I essentially grew up in two places: Seattle, Washington, and Westport, Connecticut. I moved back and forth between the two places, attended a few different schools. Westport and Seattle could not have been more different. Seattle is a vibrant, diverse, city, whose growth over the past thirty years (or so) was heavily influenced by companies like Starbucks, Microsoft, Amazon and other startups. When I was growing up, Seattle was also ground zero for the alternative/grunge music revolution, highlighted by the likes of Nirvana and Pearl Jam (the bassist for Pearl Jam attended my high school – a few years before I was there). By contrast, Westport is a sleepy bedroom community – essentially as a suburb of New York City. It’s beautiful and quiet, and it hasn’t changed all that much over time.

The one overlap between Westport and Seattle for me was politics. I worked on political campaigns in both Seattle and Westport, and more generally across Washington and Connecticut. That’s actually true for every place I have ever lived (Ann Arbor, Michigan, Washington, DC, Cambridge, Massachusetts, and more). Working in/around politics gives you the opportunity to engage with people who you might not otherwise encounter in your daily life and learn about issues that don’t necessarily affect you directly. Even if I didn’t fully appreciate it while it was happening, I know I benefited from growing up in very different environments – and what I learned and experienced has always been a part of my thinking. 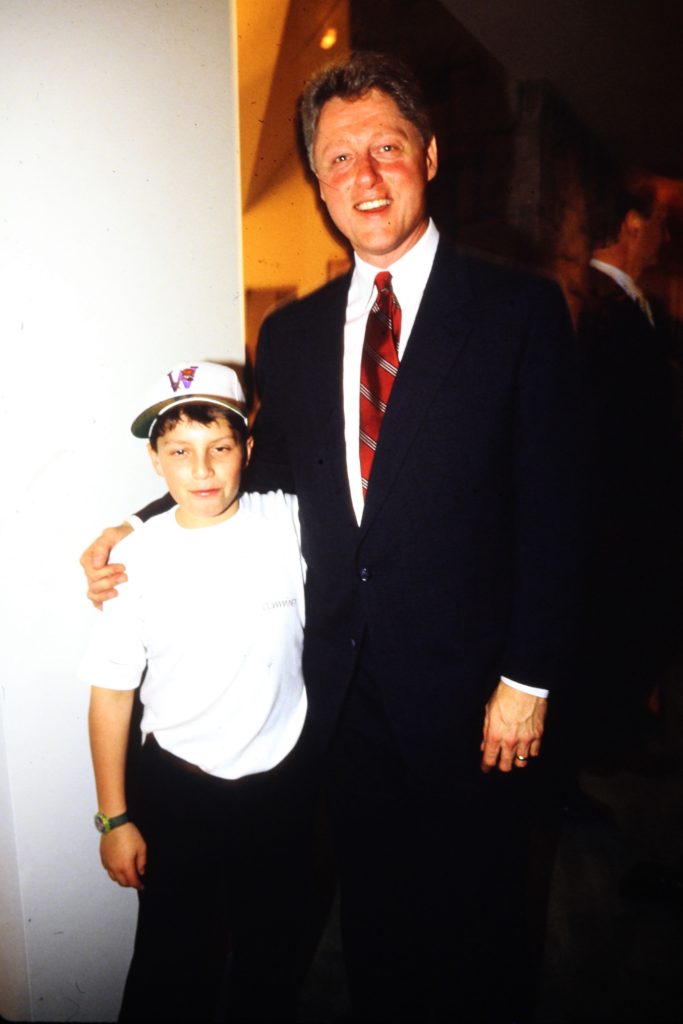 Q. How did you get from there to what you’re doing now?

A. According to family legend, I unknowingly participated in literature drops and fundraisers in utero. As a small boy, I wore t-shirts and campaign buttons collected on the trail. And if there had been a re-elect Jimmy Carter lunch box, I probably would have carried one. Starting in high school, I began working on political campaigns, earning my first paying campaign job at the age of 14. For the next decade, I worked on dozens of campaigns across the country: student elections at college in Michigan; local initiatives and city council races in Seattle; I was even Campaign Manager for a Congressional campaign in Connecticut, the youngest person in the nation to hold such a position.

Beginning in 1999, I worked as the Vice President’s briefing book director – responsible for pulling together the materials that Al Gore used to prepare for his day. I wore three pagers and two cell phones, carried two Palm Pilots and operated two different laptops each day. I traveled the country with the Vice President – visiting four and five cities and attending literally dozens of events each day. I was nicknamed the “Mouse” (for the character in the Matrix and his technological understanding) and wore a proud smile as the Vice President ridiculed him openly in front of the national media for my quirky work habits and ability to fall asleep in any position, anywhere.

Keep in mind, this was before Google or Facebook or even smartphones were part of our daily lives.  I had to build my own information network. One example: I developed relationships with reference librarians in nearly every time zone around the globe, so even when it was the middle of the night in Washington, DC, I could call someone in Honolulu to get information that would help complete a briefing. Fast forward to today and we are living in a truly connected society – with access to information, to people, to ideas from anywhere on the planet. But I remember how important it is to think in a networked way, to recognize that ideas and expertise exists everywhere, and especially when working with nonprofit organizations who have limited resources, or when trying to solve a complex problem, you have to take advantage of everything at your disposal – not just what is easiest to access or manage.

One other important point about campaign life – Al Gore tells a joke about how in politics you either win or lose — or in some cases, as happened in 2000, there is a special third category.  But for the most part, the metrics of success in politics are very clear. You have to get more votes than the person you are running against on Election Day. If you can’t do that, you lose.  Full stop.  I have spent my career thinking about ways to apply the sophistication of political campaigns to work in other ways. 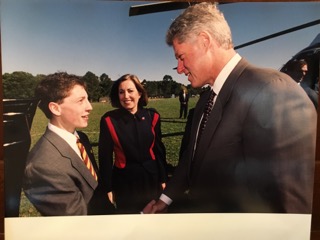 Q. The world is drowning in creativity, and also unsolved problems. There seems to be an endless stream of crazy, amazing and scary technologies, we’re in the midst of a global shift to renewable energy, there’s an oversupply of stories and storytellers, and still too many books to read. At the same time, the gap between rich and poor grows wider, political extremes are widening, wars in Syria and Iraq won’t end and the stream of refugees is endless. What makes you say there’s an imagination gap?

A. The pace of change is so rapid today that it is easy to become focused on making small, regular improvements and convincing ourselves that they will result in dramatic changes to our lives. But we also are losing sight of the big picture. In times of massive change and constant disruption, it is more important than ever that we look further ahead, and consider the larger opportunities that could be available. We have experienced periods of major disruption before – and just as now, it was the use of imagination during those times that helped us to shape a future that was so dramatically different than what came before.

Every day it seems, there are new apps to download, ideas to ponder, products to buy or trends to embrace. But just how transformative are these creations? All of these exciting improvements to our lives qualify as innovations – necessary and valuable improvements on the way that we had operated in the past – but we aren’t thinking big enough.

Instead of exploring the boundless possibilities of using technology to advance health or re-invent global politics, the limits of our imagination are driving the development of apps that enable a better television viewing experience or on-demand food delivery. In many cases we’re having discussions (and arguments) about the same things we were a generation ago. We’re trying to figure out what might happen in the future, but we seem limited to using the vocabulary and concepts of the past to guide our thinking.

Meanwhile, so many potentially interesting and important ideas are going unexplored or not even being introduced at all, because they are outside of our current experience. We need to be dreaming up things that are beyond what we know or think could be possible. That requires imagination. We simply aren’t using our imagination enough, which sets us up for a pretty disappointing future. 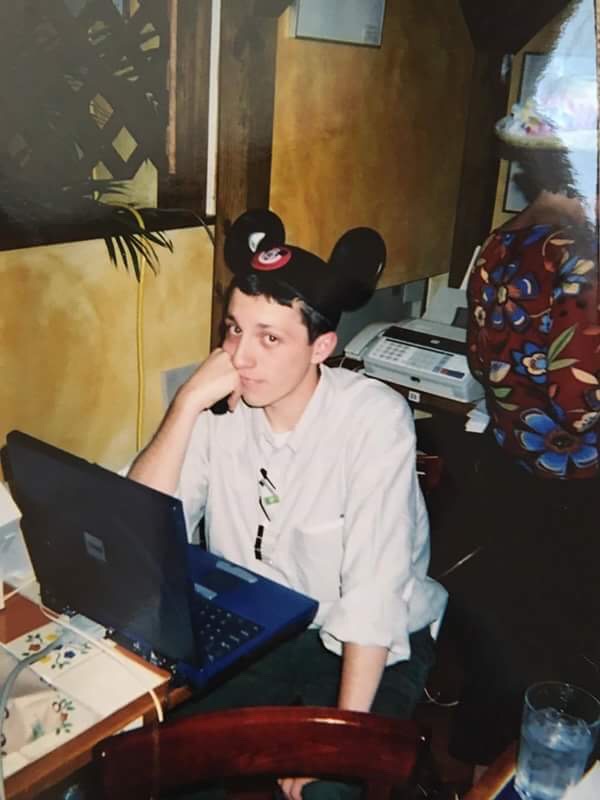 A. The short answer is … anything is possible when we close the imagination gap. For example:

Imagine if … every eligible person in the United States – 100% – voted on Election Day. Full participation would mean our politics would function very differently.

Imagine if … nobody died of coronary artery failure, Malaria, cancer (of any kind), addiction, or any other disease. What if diseases no longer even existed?

Imagine if… instead of commuting to work, taking a trip to the ballpark, or running an errand at the store using a car, bus, subway or any other vehicle, you were converted into an energy pattern and then beamed to your target destination and rematerialized. Where would you want to go?

These are not ridiculous ideas. Political leaders, medical experts, and science fiction writers have suggested each of them, in one form or another, in just the past few years. But the prospects of living in a world in which these ideas represent our reality seem improbable, if not impossible.

There are, of course, plenty of once impossible-seeming ideas – a cocktail that can fight certain infections in the body, a supercomputer that fits in your pocket, a computer that can devise the perfect way to use mayonnaise in a recipe, an African American elected President of the United States – that have become a reality.

All of these ideas, and countless others, began with imagination. Our history as a society, and the evolution of the human race, has been driven by imagination. And yet, right now, in every facet of our lives – every industry, every country, and every community – we face this imagination gap. There are new ideas being generated, but not enough of them. There are ambitious ideas about how to design and shape the future, but people are not acting on them.

Few of us are fully prepared for the kind of transformation that is occurring in our society – where everything, from our economy to health to every aspect of the human experience looks and functions differently than ever before. It is all happening so quickly, that within a decade or two everything will have changed. And then it will change again, just as quickly. Nobody, it seems, is focusing on what could be possible beyond what is happening now, let alone what’s next, or could be possible beyond that.

Closing the imagination gap puts us on an entirely different path forward. Imagine what that might look like.