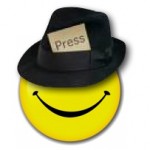 It was in the same room in the bowels of JW Marriott’s Washington bunker that editors asked us how newspapers would look five years from now.

That was 2005. We were invited to conduct a session on the future of newspapers — a tired and circular topic even then — at the annual conference of the American Society of Newspaper Editors. We returned last week on a comp, rather than taking a pass as we had in recent years.

It turns out that the future for newspapers is indeed smaller. So much that I had trouble finding it. Making my way to the bottom of the bunker, I spotted feints signs of life: a registration desk and a cluster of middle-age white guys in bad suits. Eureka, ASNE 2010! But comp or not, there was no badge of admittance to be found. A nice man with very white teeth began to make one for me. “You would be Doctor…. who?” he asked. Doctor, hmmm. Honorary recognition for an accurate prognosis about the news industry five years ago? Then I saw the small sign: American Dental Association.

“I seem to be in the wrong place.”

“That’s happened a lot today,” said Dr. Brightsmile. “I think you’re looking for that newspaper meeting. Their registration desk is around the corner, but I’m not sure anyone is there.”

Actually, there were: about 150 by a quick count. Some were speakers or comps like me. A few editors were still sulking about a pre-conference survey by Pew that found the brethren depressed, distressed, and worried about losing their papers and their jobs. I recognized many of the usual suspects who frowned when we put down an unpopular vision five years ago.

This year the digital future finally arrived at ASNE. And this year we left with a smile that made editors and dentists alike proud.