Clean slate: Show us why the iPad matters 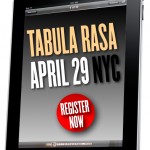 As far as I can tell, there are about 50 million stories about the iPad and eight people outside Apple who have one. Which says something about the hype and hysteria that obscures an important moment.

As usual, Apple’s marketing has been masterful, right down to putting the iPad into the hands of eight influential reviewers. The fortunate few seem to like it, which is good for them (it is hard not to like cool gifts) and very good for Apple. If you care, Gizmodo has a good take, a comparison chart and links to the Elite Eight.

The rest of the world readies for a gold rush. What company doesn’t have a alchemist developing an iPad app that transforms their content into gold? Or a developer claiming to be Merlin?

The iPad may be the next, great gadget you can’t afford to ignore, but it would be a mistake to think it has the chemistry that changes the qualities of base metals, that it contains the magic elixir of longevity, or that it imparts some infinite and ultimate wisdom to those who hold it in their hands. Drop the sucker and the glass case will break.

Time to get real.

We won’t make the mistake of considering the iPad simply as a gizmo to be loved or loathed by gadgeteers, techies, cool-seekers, opportunists and pundits. We see mass adoption as the next wave of sophisticated, mobile computing platforms and advanced social networks. As mobile phones fundamentally changed the way people communicate, this year’s burst of tablet computing leads to the Internet of Everything Everywhere by the end of this decade, the Device Decade.

WE’RE CONVENING TABULA RASA to stir innovation and entrepreneurship, as well as to make sense of significant forces that are converging on an informed, alway-on society. We’ve identified a few: the aforementioned Digital Decade, which spreads mobile computing and 10 billion devices throughout the world; and the tablet “burst,” which will likely last a year or two.

Here are some other issues on our agenda:

— Design-driven innovation. DIY and WYSIWYG innovation. The emergence of a new, visual language for seeing the world and communicating among its citizens.
— Publishing and broadcasting imperatives. Can devices fill traditional media’s looming and expanding revenue gap?
— Social entrepreneurship. Apps for companies, nonprofits, NGOs, community organizations and everyday citizens to engage.
— The Mobile-Social Society. How will continuing improvements in mobile communications platforms impact the social structures supporting commerce, finance, governance, health, the environment, transportation, entertainment, science, media and technology.
— Cool-seeking experiences. Techno Laggards and Massive Passives want to share the cool. Meet the huge, new world of connected customers.
— Boys with toys. The tech revolution and app development is skewed by the boys. What that means.
— The future of context. Is there one? Devices, apps and algorythms continue to atomize news and information, separating them from context.
— Channels, controls and trust. Who owns and controls content in all forms, on all devices? Does old wine taste better in new bottles? Should we trust the new gods of media?

With your help, we’ll start to address these issues and report on them. Our colleague Brian Reich, who’s conceived our collaborative “We Think” innovation agenda, will coordinate the initiative for reports and discussion at Tabula Rasa NYC. Contact Brian at brian@littlemmedia.com to get involved

Almost forgot: At Tabula Rasa, you’ll see amazing work and get to meet the creative geniuses who are pioneering the content, design, technology and business of tablet computing. So join the fun on Thursday, April 29 in New York. Register here.