Digital Nation: What it means to be human 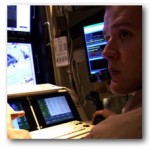 Near the end of PBS’s Digital Nation, we’re taken to a military facility in the desert an hour outside of Las Vegas where a soldier sits in a cushy chair and pilots an unmanned drone over Afghanistan. The drone’s cameras send images from a war zone to a screen at the soldier’s work station. As he maneuvers the craft with his joystick, he identifies his target and fires a missile: a kill from 7500 miles away. When his shift ends, the soldier hops in his SUV and drives home to a Spielberg suburb where’s greeted by his two kids. Just another day at the office; from the Taliban to family hour in just a few frames.

Cut to the $13 million “Army Experience Center” in Philadelphia, a mall-like setting where teens play war games on rows of gaming stations resembling the drone pilot stations. As they play video games like World of Warcraft, a recruiter chats up the gamers, inviting them to think about signing up when they’re old enough. The Army, which last year trained a crop of drone pilots who’d never actually flown airplanes, calls it a “sampling experience.” Fully immersed in a virtual world, the kids play on, controlling an avatar not unlike a drone. They earn “experience points” from killing monsters on a quest that pits them against real-time enemies — other players participating online — in open combat.

War used to be hell. Now its a game that looks like Hell, only more exciting. You don’t have to leave your seat and you can go home when mom or wife beckons.

Filmmaker Rachel Dretzin juxtaposes scenes like these so matter-of-factly that Digital Nation never slips into the overheated argument about the impact of digital culture. Dretzin’s correspondent, the enthusiastic digerati and insightful culture-watcher Doug Rushkoff, plays the laid-back, inquisitive geek on a social quest. “How are we changing what it really means to be a human being by using all this stuff?’’ Rushkoff asks.

The documentary’s unifying question takes us to familiar guideposts — generational divides between digital natives and digital immigrants, disagreements over multi-tasking and focused study, wired classrooms and high-tech labs, advocates and critics of life in the digital age — but never into cliche. It embraces both enthusiasm for, and skepticism about, the digital revolution. With a considered tone it asks us to think for ourselves about what we take, and what we might lose, from the journey.

You can watch the full 90-minute show, which aired on Frontline this week, on the web. You can view video segments, share your story, download the audiocast and podcast, or follow a closed roundtable moderated by Rushkoff on the program’s website.