Doom and gloom be damned

Don’t let the demise of the U.S. news industry fool you, or the endless chatter about what caused it and who’s to blame. That conversation, while it may be important for historical analysis, for defining new opportunities and for cathartic relief, ignores a much bigger one: Around the world, journalism is rising, not falling. The planet is connecting, reporting and using the product of journalistic activities to decide on actions and policies impacting billions of lives.

No, we have not seen hyperlocal news, citizen journalism, blogging, Twitter or non-profit investigative journalism magically sweep away the need, utility or impact of mainstream commercial media. Big media journalism is crumbling in the U.S. and its successors there have yet to emerge. Journalism in the U.S. has seen better days – and so has democracy.

But if you look outside the U.S. you can see signs that the planet is indeed changing, and that We Media is an integral part of that change. Look, for instance, to Pakistan, where the Yeh Hum Naheen Foundation claims it has gathered more than 62 million signatures for an anti-terrorism campaign through a web site, text messages, a Facebook group and, according to the PoliticsOnline blog, 6,000 ambassadors who fanned out across the country to gather signatures on street corners.

That’s politics, not journalism, but the two are connected at the hip. Look for more reporting, more fact-checking, more voices and more pressure on governments and institutions to reflect expanding access to news, information, knowledge and each other.

That’s what’s happened in Poland, where a new English-language journalism blog offers a refreshing view of journalism as something that can still be done well, and with impact, in the connected culture. Forum4editors was founded by two editors at one of Poland’s daily newspapers, Gazeta Wyborcza.

Undoubtedly what sets this blog apart from the growing legion of Englsih-language journalism blogs is the view and skew from Poland, a former Eastern Block state famous for its 1980s break with communism led by Lech Walesa’s Solidarity movement.

You might say forum4editors is going for a cup “half full” view of journalism – its optimistic tone is in stark contrast to the “half empty” pessimism coming from dozens of blogs and media news sources in the U.S. and UK. (Here’s a nice collection of more than 100 international media blogs, compiled by Italian journalist Carlo Felice Dalla Pasqua.)

“We were missing such a meeting place on the net where there is no complaining and reports like ‘let-us-go-to-the-grave-now,'” forum4editors founder Grzegorz (Gregory) Piechota told me in a recent email exchange. He’s a special projects editor at Gazeta Wyhborcza.

Since its launch earlier this month, forum4editors has weighed into several online discussions of western journalism trends and ideas, such as an anaylsis of the value of news brands – and, literally, how much to charge for them. This was a response to U.S. media consultant Juan Antonio Giner’s modest proposal to increase the price of the New York Times to $5. Forum4editors responded to Jeff Jarvis’s recent suggestion, in a column for The Guardian, that newspapers should get rid of editors. Piechota provided examples of three multi-media, crowdsourced and downright activist reporting projects produced by his newspaper that needed human organizers – call them editors, curators or maitre d’s. Professional ringmasters were central to the production of these projects.

The real insight from this new blog is not in its Polish view of western debates but in its reporting on how journalism and free expression, at least in Poland, can flourish in a culture empowered and made stronger by We Media. For instance, the blog tells the story of Poland’s free Metro newspaper, which encouraged street protests and a letter-writing campaign following China’s crackdown on Tibet protests this spring. The campaign persuaded Poland’s president and prime minister to drop out of Olympics activities in China this month.

When was the last time a mainstream US newspaper called for street protests or launched a serious campaign for the U.S. president to do anything? 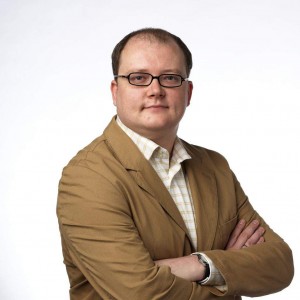 Here’s more, in his own words, from forum4editors founder Gregory Piechota, about why he and his Polish newspaper pals launched their new blog:

Can you elaborate on why you launched this and what you mean about “let us go to the grave now?”

We want forum4editors.com to become the source of practical editorial and marketing ideas for creative minds at newspapers. We were missing a meeting place in the net where we could share the best practices in multi-media journalism, interactions with readers, promoting our editorial work and to debate on issues that we face.

Attending industry conferences worldwide we found there was a lot of talks about business models, technology, designs, but there was very little talk about contents of newspapers. Many people were claiming: “Content is king!”, but a few were proving it.

We believe in journalism. In telling great stories that move communities. In watching those in power (government or business or any other) and defending those helpless. In providing citizens information and comment that will help them to make better choices.

One can call it old-fashioned view on journalism. Maybe. But we believe in it, we do it in innovative ways, we don’t hesitate to cooperate with our marketing people to make our impact stronger and we get great results. We rush people to newsstands, we drive traffic to our websites, and sometimes we change the world for better.

We do not want to follow those in newspapers who lost confidence in their mission, talk about “management of decline” and in fact dig graves when still alive. We hope we can inspire them and launching forum4editors.com is the tool to achieve that.

What’s the state of journalism in Eastern Europe?

It is very different in Poland where independent press has flourished since 1989 and for example in Belarus where a journalist still faces arrest for disclosing the truth. It is different in Czech Republic where almost all daily newspapers belong to foreign publishers and in Ukraine where many papers are owned by oligarchs who use them to support certain politicians.

It is highly competitive – can you imagine that since 2003 there have been seven new nation-wide daily newspapers launched in Poland? And competition is what makes publishers, editors and journalists more innovative and their newspapers more interesting for readers, I believe.

Newspapers are more advanced in many ways than in the West. Publishers here in Poland invested in new presses in 90s and later, so every single daily newspaper is full-color, there are no papers in uncomfortable broad-sheet format and some dailies are partly printed on glossy paper like magazines. You can imagine quality of photos and graphics there!

The internet revolution came here slowly and later, so we could learn from Western publishers’ mistakes. For example: my Gazeta Wyborcza’s publisher embraced the net and is now competing with Google and portals similar to Yahoo rather than with other newspapers.

At the same time I find this place more old-fashioned than in the West in the way journalists think about their mission. Most of these newspapers have been launched after communism collapsed, took part in building democracies in their countries and now serve as guardians of democratic principles. Example: my Gazeta Wyborcza still carries a motto
on the front page that reads in English: ”We do care” (in Polish it sounds better, literally it reads: ”For us it is not like we do not care a hanging”).

What I like here is that we understand freedom of the press in a little different way than in the US for example. Newspapers and journalists here report facts as honestly as possible, but they don’t claim that they are super-naturally objective. They have clear agendas and are not afraid of activism. They create a market of ideas and views. And readers
are who choose what suits them best. It makes our media more exciting, I think.

What I don’t like here is narrow-mindedness of some media and an overhelming news clutter. We fight it and add to national agenda topics like China and Tibet, US elections, Muslim world, everyday life in the Western Europe etc. We invest in narrative and literary journalism that tells more than just news.

Of course, we face many challenges similar to those in the West: media ownership concentration, tabloidisation (not in newsprint format, but in contents: rise of sensationalism, celebrity news), television democracy (PR more important than real issues).

What trends or innovations are you most excited about?

Globalisation is really fun and the European Union as a political innovation is very useful. I like that I can live in Poland, study in France, work in England, spend holidays in Spain, pay with the same euro in Greece and Italy, watch Russian movies on the net, set up a blog in English and give this interview to you in the States. Maybe I am so
excited about this just because I grew up behind the iron curtain, but I am still wondering it is all possible and so easy.

Education is no longer a period in people’s lives, but a permanent activity, nearly a habit. Long time ago people were finishing their education just after school and finding the job. Today we learn new things almost instantly and often unconsciously by using new tools and services, by visiting new places and by meeting new people all the time.
The knowledge we learn in our lives is so much broader than our parents and grandparents could ever get. The number of ideas, views, facts easily available seems to be infinite. Of course, the number of information that surrounds you can sometimes drive you crazy – for example – when you try to recall all the ID numbers, PINs, logins and passwords you must have.

This information clutter and shortages in attention make some people think that now it is a time for shorter news and data bites. That people no longer want to read longer stories, watch longer movies, play longer with things. I am excited when I see it can go exactly opposite. When I see kids reading 800-page book on Harry Potter, when I go to the full
cinema for a 3-hours-long Chinese movie Hero, or when our newspaper’s single-copy sales increases thanks to 7-part series of 4-pages-long feature articles on the Polish legendary leader of the Solidarity movement Lech Walesa.

I am excited about new communication tools we can use for a good reason. 12 years ago, long before the internet revolution in Poland, we invited readers to review all 400 maternity wards in Polish hospitals. We got 2000 letters by post and we were very happy with the results. Two years ago we asked again for help and we gathered 40,000 reviews submitted mainly online by mothers who really gave birth in those hospitals!

Does the decline of newspaper companies in the U.S. and western Europe worry you?

It worries us because those “global trends” are used by some people as an excuse to their incompetence, lack of creativity and courage.

It makes us also more innovative – we try new things faster and look for talents who will share our values in whatever medium is going to prosper in the future.