The End of Apathy 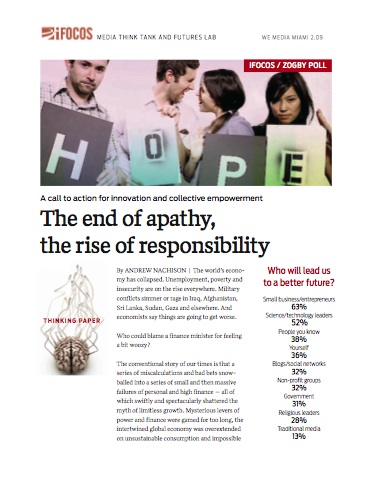 Most Americans believe small business, science and tech leaders will lead the U.S. to a better future – not the news media, government or large corporations. That’s the key finding from a new We Media/Zogby survey released today in conjunction with the 2009 We Media Miami conference. You can find and discuss the findings here.

Like all surveys, this one is a snapshot in time – and given the times, not that surprising. The world is in a world of mess made worse by failing big businesses and inept governments. Big media is tumbling too.

But it correlates with what Dale and I have been forecasting for nearly a decade: a historic, global shift in human behavior and organization. A new era.

While the marketers and lords of commerce were playing with our futures, the future itself was emerging in ways that broke dramatically from the past. Technology, economics and human creativity converged to shape the post-collapse era, the connected and empowered culture we call the New Now.

In the connected culture we can no longer claim ignorance, innocence
or powerlessness. Great forces of authority, perception and commerce
compete for our attention and submission. What’s changed is that we
can compete back. And we are.

Something big is emerging – a culture broadly redefined and organized around individuals, creativity, empowerment and responsibility – and enriched, as we’ve long anticipated, by the continuous flow of information through ubiquitous digital networks. In his book The Way We’ll Be, John Zogby writes optimistically of what he sees in today’s 20-somethings – global, digital natives, diverse and accepting of differences, and hungry for solutions. We see that too in our work at iFOCOS: an emerging culture of passion and purpose – in business, in life, in everything.

The public’s sense of who will lead us to a better future reflects the failures of the 20th Century’s biggest and most influential institutions.  Dissatisfaction with the news media, corporations and government runs deep. So in The New Now Americans look elsewhere. They reflect a business imperative for leadership and social responsibility, and an opportunity for all of us to inform, define and provide that leadership. If big business, government or the media won’t lead, we’ll lead ourselves. We’ll create our own businesses and our own media to build a better future.

No matter where you sit or what you do, that’s a call to action to participate, to inspire hope and bring prosperity to more people. It’s an agenda for everyone: Lead us to a better future.

Here’s a longer thinking paper on the End of Apathy. This is a new and expansive agenda for us, our new album – and it’s a work in progress. We’d love your feedback and input as we aim to fill in the details in the next few months. We’re also eager to bring The New Now and The End of Apathy into companies and organizations that want to learn more about the agenda and how to apply it. If you’d like to follow up, contact me via the We Media Community.