Host, The Takeaway with John Hockenberry
Participant: We Media Miami ’10 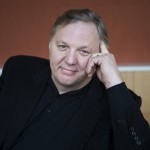 “The Takeaway” hosted by John Hockenberry and Celeste Headlee, marks John’s return to his roots in public radio—where he was one of the medium’s original innovators —after 15 years in network and cable television. During his time at ABC and NBC, he earned four Emmy Awards, three Peabody Awards, an Edward R. Murrow Award, and a Casey Medal. Hockenberry has also been recognized for his pioneering online content, hosts the award-winning public radio series The DNA Files, is a weekly commentator for the series The Infinite Mind and currently sits as a Distinguished Fellow at the prestigious MIT Media Lab.

At NBC, he served as a correspondent for Dateline where his work ranged from an intimate portrait of a schizophrenic young adult to an investigative piece that traced internet swindlers in an international web to the first and only interview with the brother of two of the 9/11 suicide hijackers. He also hosted two of his own programs for MSNBC, Hockenberry and Edgewise.

Hockenberry was one of the first Western broadcast journalists to report from Kurdish refugee camps in Northern Iraq and Southern Turkey.  During the first Gulf War, he reported Israel, Tunisia, Morocco, Jordan, Turkey, Iraq and Iran.  Hockenberry also spent two years as a correspondent based in Jerusalem during the most intensive conflict of the Palestinian uprising.

Hockenberry is a contributing editor for Metropolis magazines and has written for The New York Times, The New Yorker, I.D., The Columbia Journalism Review, Details, Conde Nast Portfolio, Wired and The Washington Post.

Born in Dayton, Ohio, Hockenberry grew up in upstate New York and Michigan, and attended the University of Chicago and the University of Oregon. He and his wife Alison live in Brooklyn with their two sets of twins, Zoe, Olivia, Zachary and Regan.

“The Takeaway with John Hockenberry” is a co-production of WNYC and Public Radio International, in collaboration with The BBC World Service, The New York Times and WGBH Boston.