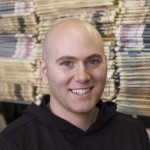 At Sacramento Press Ben focuses on operations and oversees every department. Ben sets the vision and process for the online media outlet and runs customer service.

With direct input from his team, Ben defines the business and technology road map for the organization and works to continually refine the “hyper-local” model to reclaim community.

Ben grew up in Sacramento and graduated from The University of Rochester with a B.A. in Economics and Political Science.