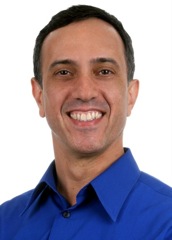 Benkoil is frequently asked to speak at leading media industry events and conferences, and teaches Digital Marketing to MBA students at the Zicklin School of Business in New York He has written and produced hundreds of articles and videos on digital media, for Paid Content, CNET, mediabistro, the Knight Citizen News Network, Jack Myers Media Business Report, his own blog www.mediaflect.com and show Naked Media and is currently a regular contributor to the Poynter Institute’s e-Media Tidbits blog as well as PBS MediaShift, where he has been leading sales and marketing initiatives.

An MBA who graduated top five in his class at Zicklin, he is also an award-winning journalist and former foreign correspondent for The Associated Press and Newsweek. As founding international producer, then managing producer at ABCNews.com, Dorian led teams to some of the site’s first and most prestigious awards and later helped earn the site millions of dollars through advertising and business development.

On the personal front, he loves tennis, skating, cross-country skiing, world cuisines and speaking Japanese, French, and gibberish with his spouse and children in New York.