Co-founder and Executive Director of the Sunlight Foundation
Participant: We Media Miami ’10 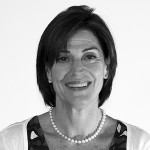 Sunlight Foundation is a Washington-based, non-partisan non-profit dedicated to using the power of the Internet to catalyze greater government openness and transparency. She is the founder of two other prominent Washington-based organizations in the field of money and politics — the Center for Responsive Politics and Public Campaign — and a nationally recognized expert on transparency and the influence of money in politics. Her experience as a Washington advocate for more than 35 years spans the worlds of non-profit advocacy, grassroots activism and journalism. Ms. Miller’s work has recently been featured in Washingtonian Magazine (“100 Tech Titans,” May, 2009), Fast Company, (“The Most Influential Women in Technology,” January, 2009), WIRED Magazine (“15 People The Next President Should Listen To,” October, 2008), The Chronicle of Philanthropy (“Seeking Online Exposure,” January, 2008). Ms. Miller also served as Deputy Director of Campaign for America’s Future, the publisher of TomPaine.com and a senior fellow at The American Prospect. She spent nearly a decade working on Capitol Hill. She blogs regularly at SunlightFoundation.com.