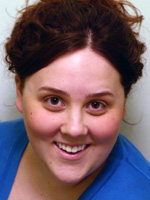 Lauren McCullough is an award-winning journalist and social media enthusiast. She has traveled the country speaking about multimedia journalism and she lectures on the use and importance of social media in the newsroom.

In her role as social networks and news engagement manager for The Associated Press, McCullough oversees the newsroom’s social media efforts, including the flagship accounts on Facebook and Twitter. She directs the work of AP’s journalists around the world in pursuing sources from social networks, as well as promoting AP and member content.

McCullough was recognized by the Associated Press Managing Editors Association with the 2008 John L. Dougherty Award. She has also been awarded two AP Beat of the Week Awards for her work with citizen journalists during the 2009 Hudson River plane splashdown and the 2007 Minnesota bridge collapse.

Prior to joining the AP, she worked for Newsday.com in Melville, N.Y., and The Post-Star in Glens Falls, N.Y.