President and CEO of PBS
Participant: We Media Miami ’10 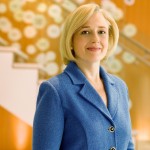 PBS is the nation’s largest non-commercial media organization with more than 350 member stations throughout the country. Since she arrived at PBS in March 2006, Ms. Kerger has made particularly strong commitments to the arts, news and public affairs, high-quality content for education, diversity, and the use of new technology to bring public service media into the lives of all Americans. These initiatives have been recognized by groups ranging from the Academy of Television Arts & Sciences to the Parents Choice Foundation. The rapid growth and critical acclaim for the PBS online video services, www.pbs.org and www.pbskids.org, help ensure that PBS programming is accessible across multiple platforms to families in every part of the US and, increasingly, to a global audience.