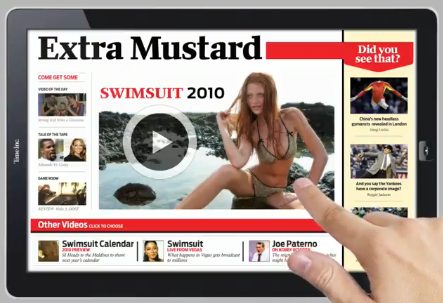 Magazine and newspaper publishers have fantasized, for more than a decade, about the day when portable digital display technologies render paper, ink, printing, trucks, postage and home delivery obsolete. In this soft-focus digital nirvana, unspeakable riches will flow from new business models that eliminate most production and distribution expenses while producing revenue – and profits – far greater than what magazines and newspapers have been able to extract from their ad-supported web and mobile offerings. Hearst, for instance, invested in 1998 in E-Ink, one of the companies that makes high-resolution displays like those found in Amazon’s Kindle, Sony’s E-Reader and the new Nook from Barnes & Noble in the U.S.

As rumors swirl and geek saliva oozes around an Apple tablet said to be in the works for 2010, the fantasy of next-gen tech salvation for print publishers is gaining momentum, at least in the U.S., where a coalition of magazine publishers has announced a “digital storefront” to sell digital magazines.

Can’t you imagine how warm and fuzzy it must make a media baron feel, or even a down-sized editor, to imagine cash raining down, delivered not only willingly but joyously by loving readers and advertisers who see, once again, as in ye olde times, that big media companies offer something wonderful, unique and valuable. People will pay for it. Again and again and again. With stogies in mouths, champagne in flutes, and order, control, superiority and dominance restored, the vision fades to credits. Publishers, stock holders and all that trickles down from them live happily ever after.

Only (sound record scratch): In a hyper-competitive market of ever-expanding choice, atomized content, social distribution and open networks, the business fantasy will turn to bitter disappointment when the love and riches flow widely, not narrowly, to many sources. The pie may grow, but the slices will be slimmer and slimmer.

The flaw, of course, is expecting too much from technology – the next big thing. Even the mockup reflects ideas, techniques and design concepts that are, like the technology itself, more than a decade old.

That doesn’t mean it isn’t lovely. It’s good enough to touch. Truly. Imagine a giant iPhone, with a touch screen, processor and broadband connections vastly faster and more responsive than a real iPhone, and some nicely-imagined packaging of text, photos, videos, sharing and discussion. Of course, you might stick with fantasy mode and imagine all of that in all your favorite web sites. Maybe tablets will spark advances in design and user experience that should have become commonplace by now. Maybe lovely visions like this will replace the mind-numbing scroll of links found on, say, Sports Illustrated The Web Site, where the publisher’s business goals clearly take precedence over the reader’s, where lust for ad impressions reveals a service built for clicks, not for the joy or love of anything or anyone, where readers are just that, voiceless, even when someone dies.

This is much nicer: