Remember Copenhagen? The world’s last chance to save itself from climate calamity came and went last December. But if you heard of civil society’s concerns about the urgency of the problem, that may have been because of the global environmental marketing campaign by the people at the urgently named TCKTCKTCK. 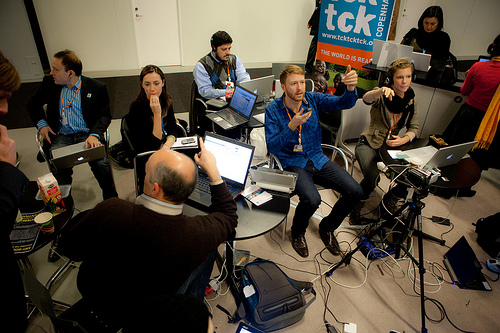 About two years ago, “a number of the leading lights in the climate movement decided that what the movement really needed to create more momentum was a campaign similar to the Make Poverty History campaign or the One campaign in the U.S.,” said Jason Mogus, TCKTCKTCK’s digital strategy manager, who lives and works in Vancouver, Canada. “They decided that the movement needed to come together, and we needed to get on the radar of world leaders. We needed to change the direction of history by getting a global agreement of all nations to get a coordinated climate plan to deal with this issue.”

The campaign started with 18 partners, including WWF, Greenpeace and Oxfam, which realized that the challenge was bigger than any of them, and if they were to have an impact on world leaders they had to act in a coordinated fashion. So they decided to coordinate their strategies with a single brand suggesting a time bomb — “Tick Tick Tick” — and a single “ask,” what they termed a fair ambitious and binding climate deal — or “FAB.”

The campaign really only got off the ground four months before the conference, but was able to rally an astonishing 16 million signatures in support of the FAB agenda, now embraced by an expanded coalition of 250 nongovernmental organizations worldwide.

But the campaign was much more than a marketing coup. It represented an opportunity for the organizations — not all of which had been focused on the environment as their main issue — for the first time to work together on a common project.

“The biggest innovation we did was not technical, but building a collaboration model or a network-driven model into everything that we did,” Mogus said. “It wasn’t easy for us to bring together all these diverse groups into one common framework. This campaign was a lot more like a Facebook — we had to bake network principles into everything that we did.” The organizers called it an “open source campaign.”

The site launched in the end of August, and the campaign was done in mid-December. In that four months, TCKTCKTCK got 2.5 million page views, a little over half of them unique visitors.

Perhaps more importantly, Mogus said, more than a million people engaged in action on the streets. In Copenhagen in December, the organization, which had only about 40 staffers at its peak, set up a “rapid-response e-network,” including Grist, Huffington Post and bloggers from more than 80 countries. They also set up a Fresh Air Center in downtown Copenhagen that incorporated a “blogger support center.” The center hosted briefings during the day, and a live feed from the conference.

“That became particularly critical when they shut bloggers and NGOs out of the out of the conference for the second week,” Mogus said. The combined effects added up to a lot of influence, both among participants in the conference, who were unable to go home and declare victory, and spectators worldwide.

“The power of this campaign,” Mogus said, “was that through all of these organizations we had millions and millions of people.”