The app in the car 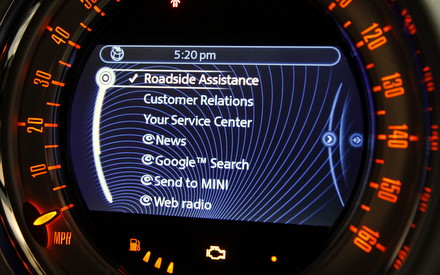 The 2011 Mini Countryman dashboard reveals options customized, updated and connected to the mobile web through an iPhone app.

The new Mini Countryman takes the integration of tech, media and cars to a new level. The Mini Connected app for iPhone works with the in-dash entertainment system to deliver options such as listening to Pandora or reading aloud RSS feeds. The functions are integrated into the car’s dashboard controls. There’s no Android version yet, but no doubt there will be one eventually.

As Jennifer Degtjarewsky notes in Road & Track, what’s most intriguing about mobile, web-connected apps in a car is the simplicity, and perhaps the coming expectation, of future upgrades. Your car may age and depreciate, but the app and your connection to it – the dashboard itself – can be new and improved for as long as you own the car. Apple’s clever advertising slogan, “There’s an app for that,” is ingenious in its deceit. There are indeed a bazillion apps – but not for everything. Yet. The slogan is a prediction.

Granted, this could introduce new and dangerous driver distractions. Angry Birds in your dashboard is a bad idea. But future versions of your car’s app might improve your driving experience, eliminate flaws or add beneficial features that were unavailable when you bought the car. It might protect you from distracting phone calls, or your in-dash navigation may improve over time as you update your nav app or completely swap from one service to another. The car gets older, but better.

Mini extends this modular thinking to the physical design of the car itself. The new 4-door Countryman model incorporates a powered rail down the center of the cabin that can be customized and personalized with items such as cupholders and charging docks. Last year Mini organized a design competition to come up with creative ideas for the rail. Winning concepts included an in-car gas fireplace and hot water kettle, a karaoke system, an extra steering wheel and a back seat iPad dock for multi-player games. 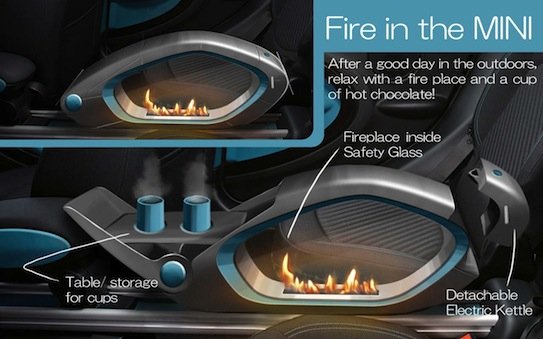 This isn't real - but it's a whimsical design concept that illustrates how the powered rail in the 2011 Mini Countryman might be customized with third-party options. The rail and the car are real, available now with add-ons such as cup holders and iPod docks.