The networked culture comes of age 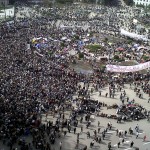 But there’s much more going on than business, consumption or greed. We’re in the midst of something extraordinary. Dictatorships are crumbling, microblogs are taking off in China, hackers are fiddling with credit cards, banks and stock markets, communities of all flavors are scheduling Meetups everywhere, and Groupon, Living Social and other social deals distributors have shown local merchants how to move goods and bring in customers without buying ads.

Is all this simply the rebound from economic collapse coupled with internet and mobile phone proliferation? Or the impact and triumph of Facebook, Twitter or mobile networks? Or the consequence of shifting trust? Somehow, the digital universe expanded to embrace and shroud the earth. Or we embraced the universe.

Of course all this has been unfolding slowly. But it feels like in a matter of weeks we’ve experienced a supernova, or cosmic inflation – like the networked culture that had been slowly maturing for nearly two decades metamorphosed into another form. A new lifestage? Toddler? Juvenile? Adolescent? Subadult? A new generation? Whatever we call it, digital life has eclipsed theory, metaphor, aspiration and the realm of digerati. In 2011, it became massively, incomprehensibly real. It became now. We’re all digerati now. For reasons that historians may one day ferret out, in 2011 the cosmic laws and atomic particles of the connected society took shape and diffused to define the world as it would forever after be known.

So We Media, this grand idea that Dale Peskin and I have been exploring for nearly a decade, is now simply the way things are. “We” are driving the culture. We’re networked. We’re a system. Developer-scholar-blogging godfather Dave Winer says news is an environment. I’ve called it a fog – the cloud that surrounds us. We produce, share and acquire information, ideas and insights through a diffuse mist of connections linked through digital and personal networks. We are media, whether we tweet, blog, make or share videos, check in somewhere, like something on Facebook, follow someone, email a link to Posterous, report for a local or global news service, design an app for Rupert Murdoch or for one of his arch enemies, or passively surf, consume, read or answer a Craigsist ad. Or join a crowd to protest the government. Working alone or in collaboration with others, we create, curate and connect to knowledge that spans the globe, moves markets and changes governments.

All of this fills me with a mix of wonder, dread and certainty that we’ve entered an age of astonishing creativity, invention and chaos. I’m feeling woozier than usual. At the end of 2010, Wikileaks embarrassed the U.S. government and put every nation, every business and every citizen on alert that secrets matter, whether your intent is to keep them or to reveal them. Consider what’s already unfolded in the first weeks of 2011:

Any one of these items might be noted with admiration for the individuals involved, dismissed as isolated, insignificant developments, or both.

But considered together, along with everything we know about how technology has liberated information, empowered individuals, reshaped trust networks and disrupted systems of power and control, these We Media flash points and data blips hint at something truly awesome unfolding rapidly before our eyes.

For the first time since the web itself was created by Tim Berners-Lee at a Swiss research lab in 1993, business, markets, governments and society as a whole are aligning around the networked culture.

Alignment does not mean agreement. But it means widespread adoption of the technical, cultural and social relationships that define our digital experiences and link them to our human experiences.

As early adopters make room for everyone else, what follows will be even more chaotic than what came before. Old empires – news, entertainment, business, government – will continue to crumble, fade, collapse, expire. But even in the afterglow of a global economic collapse, new empires are on the rise and new methods of informing, connecting, sharing and influencing each other are taking root. For brands, marketers, causes and political campaigns the business of influence has been quantified and refined into repeatable processes and detailed metrics.

What happens next in China? Myanmar? North Korea? Iraq? Iran? Afghanistan? Israel, Gaza and The West Bank? How about our schools and neighborhoods?

The entire planet is up for grabs.