The rise and fall of Pando Projects

Editor’s Note: We’ve just selected two new winners of our annual PitchIt! Challenge. I think they’re great and hope they’ll thrive, change the world and open up new horizons for people who use their services. But they may not. They may fail. Hard and fast. Or soft and slow. For all the entrepreneurial hype about how admirable it is to launch a startup, to be a founder, to build something amazing, to create something new and meaningful – the reality can be less happy-happy and more hard-hard. This is the inconvenient truth for all founders – whether they’re trying to build a business empire or a non-profit social venture. Failure is much more likely than success. A year ago, former investment banker Milena Arciszewski was one of our 2011 PitchIt! winners. She wanted to launch Pando Projects, a non-profit platform to organize local community service projects. Six month later, it was over. That is, “On hiatus.” The fund-raising had fizzled, the execution had languished. Supporters disappeared. The money ran out. Milena moved on. This is her story. – Andrew Nachison / We Media 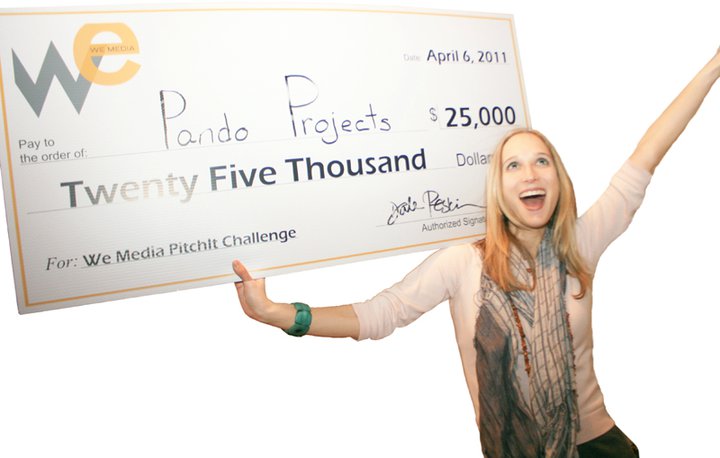 At that point, I had been working for a full year on a start-up called Pando Projects.  I had mobilized a team to build a prototype of our website, and had tested it out with 15 pilot projects in New York City.  My goal was to help people start their own projects to tackle global issues in local ways.

The bigger vision was to help thousands of Americans run their own amazing local initiatives, share their success stories, promote the best ideas, and scale up the initiatives that could make a greater impact.  So many people have brilliant ideas and good intentions… I simply wanted to give them the tools they needed to change the world. 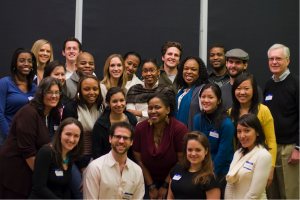 At the time of the We Media competition, we had so much potential.  The MacArthur Foundation had called us, “the new face of activism.”  The Huffington Post had named me, “the greatest woman of the day.”  Good Magazine had called Pando, “refreshing and inspiring.”  And FastCompany had written, “Pando makes meaningful ideas more executable and brainpower more accessible… and Millennials are demonstrating an inspiring willingness to assume responsibility for the change they want to see in the world.”

We were on fire.

The problem was that I had run out of money.  The month of the We Media competition was the last month that I could have afforded to pay rent.  So when I held that check, my tears were real.  I had literally put everything I had into getting Pando going, and We Media was my first big break.  That day of meeting incredible mentors (like Craig Newmark and Charlie O’Donnell) and fighting for my cause and WINNING… it was one of the best days of my entire life.

After the win, I immediately used money to pay down Pando debts – the lawyer fees, the cost of our pilot website, the expenses from hosting a leadership retreat for our pilot project leaders… it all added up.  I also decided I was ready for the fundraising phase.  I immediately left for the Summit Series Conference where I met incredible philanthropists and VCs and business leaders who promised to help me raise another $250K.  They loved my idea, they loved my sincerity…  The BBC interviewed me as a “the founder of a promising start-up.”

Success seemed inevitable. Joyce’s project taught kids in Chinatown about other cultures, and was featured in “The Epoch Times”

From August through September, I went to countless conferences, meeting people and pitching my idea, knowing that $25K would not last long.  (These conferences included Summit, Socap, Renaissance Weekend, Craigslist Bootcamp, the National Conference for Volunteerism and Service, etc.)

Meanwhile I continued to manage our pilot projects and tried to grow the organization, which now had over 50 volunteers.   I was completely overwhelmed.  I needed help.  Two investment funds committed $100,000 to our growth, but it was unclear when I would get the money.  I was working on a partnership with Ford Motor Company which could have given us $500,000 upfront, but the meetings kept getting delayed.

Ashley’s project was an after-school reading class for kids in West Harlem. I felt things falling apart.  Everyone seemed to love the idea and be impressed by our progress, but no one was willing to write the first big check.

Without a Co-Founder to help me push through the days, I felt myself burning out.  I had poured everything I had into Pando – – my money, my time, and my soul.  I had success stories and press and the We Media win – and yet I couldn’t raise the $250K I needed to build a real site and hire a team to actually take Pando to the next level.

I found myself becoming reckless and irresponsible, not responding to emails and showing up to meetings unprepared.  I started to dwell on the setbacks.  (Our web developer kept delaying the launch of our site… I had a toe infection and couldn’t afford a trip to the doctor… several fundraising leads that I had pursued for months proved to be dead ends… the list went on and on.)

I started to understand why so many start-ups fail and why so many Founders become bitter, emotional, sickly creatures.  My boyfriend and I ended a three-year relationship and I lost the one person that had believed in me from day one.  I knew that I could probably raise the money I needed if I kept fighting, but I had lost my strength.  The battle was over.  I had helped support some incredible projects in New York and I had grown as a leader and as a human being.  But I was ready to admit that I needed help.Jodi organized a dance class to teach kids about confidence and creativity.

In October I put Pando on hold and decided to apply to business school.  I dreamt of attending Stanford, where I could learn how to take Pando to the next level.  I would learn about business, develop my network, and then re-launch Pando upon graduation.  But… I didn’t get in!  The rejection letter was sent on March 31st.  I guess the Universe has other plans for me yet.

I still hope that I can re-launch Pando.  But in the meantime, I’m moving to San Francisco to find a job doing something meaningful.  Before Pando I worked in investment banking and microfinance, so I’m really open to everything.  I just want to make the world better, somehow.  That’s all I’ve ever really wanted to do.

I’m so grateful for We Media and feel complete sadness and shame that the failure of Pando might in some way detract from the legitimacy of this competition.  The We Media win changed my life and re-invigorated my start-up.  I had meetings with Esther Dyson, Charlie O’Donnell, Stowe Boyd, Ben Berkowitz and Craig Newmark that all opened doors for me.  Andrew Nachison was a continual source of love and support.

The win gave me so much credibility as I embarked on my fundraising journey. I still don’t really know what went wrong.  I really tried.  I really fought for this. I think the biggest issue was that I didn’t have a co-founder to bring the vision to life.  If I could start Pando all over again, that’s what I would change.  I would find a co-founder to help me make it happen.

I send my love to the current We Media finalists.  I can’t say how your start-ups will turn out, but I can promise you that you’re in for the ride of your life …

Milena Arciszewski is the founder of Pando Projects, a platform that supports local volunteer projects.