What makes us rich?

At last week’s We Media Miami conference we introduced an agenda for smart capitalism in the New Now. Our economic stimulus package: reboot capitalism with a fresh look at people, outcomes, connections and creativity. We also presented a better balance sheet for companies and organizations to express their stories and report results. 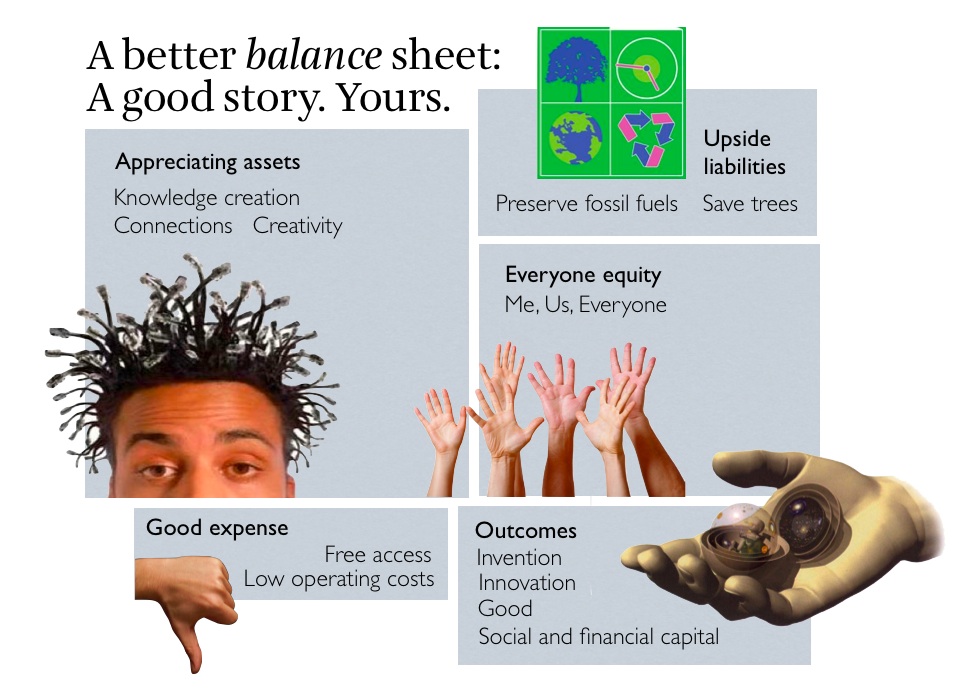 20th Century capitalism was dumb: unfairly distributed, mortgaged and borrowed, destructive to communities, toxic, shallow, filled with air, and ultimately unsustainable. It came crashing down in the lost, first decade of the 21st Century.

21th Century capitalism must be smarter. We must grow and create a new economy by making capitalism attainable, equitable, resilient and sustainable. To achieve this we must make all citizens smarter, healthier, happier, and wealthier. Capitalism must be accessible to all. We believe that media, technology and a connected society – the Power of Us — are the mechanisms for change. Our agenda:

Income to Outcomes: Economics that merely measure financial numbers represent a weak story. We’ve learned the hard way that it’s the wrong story: a misleading mythology, except to the quants among us. The new story: tangible human outcomes and an authentic value proposition. The right outcomes drive the new income. The old question: Are we richer today than we were yesterday? The new question: What makes us rich?

Transactions to Connections: Creating a marketplace for transactions is so 20th Century. Control access, distribution and flow of goods, services and information. Thrive by dominating or controlling the channels. What happens when almost everyone has their own channel, their own marketplace, or free and immediate access to one? The flow becomes the currency. 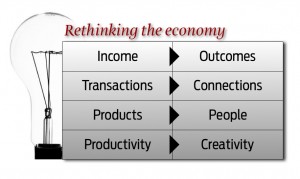 Products to people: Dumb capitalism is powered by capital seeking the lowest cost of production. It disappoints with products and services that meet the lowest expectations – or unrealistic ones — or occupy the shortest shelf life. Smart capitalism empowers people to seek the capital to create, invent and innovate. It rewards skill, dedication, execution, craftsmanship and service – people investing in people.

Productivity to creativity: Creativity is hard to measure, manage and model, so the quants focus on productivity instead. The result is dumb: we’re producing more and more of the same stuff and its worth less and less. Smart capitalism focuses on economic creativity, because creativity establishes new value, instead of just shifting the old value around. So smart growth is creative, not merely productive.

Many We Media participants embraced the agenda, which has brewing for some time. Leaders attending the World Economic Forum in Davos addressed these and other ideas with considerable disagreement. Several participants at We Media, as well as members of the We Media Community, have suggested that the original agenda was extreme.

We’ve modified some of the original language at We Media for clarity of intention. For example, “outcomes, not income” has become “income to outcomes” as a way of expressing the transition from dumb capitalism to smart capitalism, rather than implying — either incorrectly or inadvertently – that income no longer matters. Of course it does; as capitalists, we’re all for income. The point is that in 21st Century capitalism, income will derive from tangible, human outcomes. The same thinking applies to the transitions in transactions/connections, products/people, and productivity/creativity.

We’re looking to the creativity and connections of people for more advanced outcomes around the agenda. Send us your thoughts and ideas. Smarter is a better choice than the dumb legacy we’ve been given.