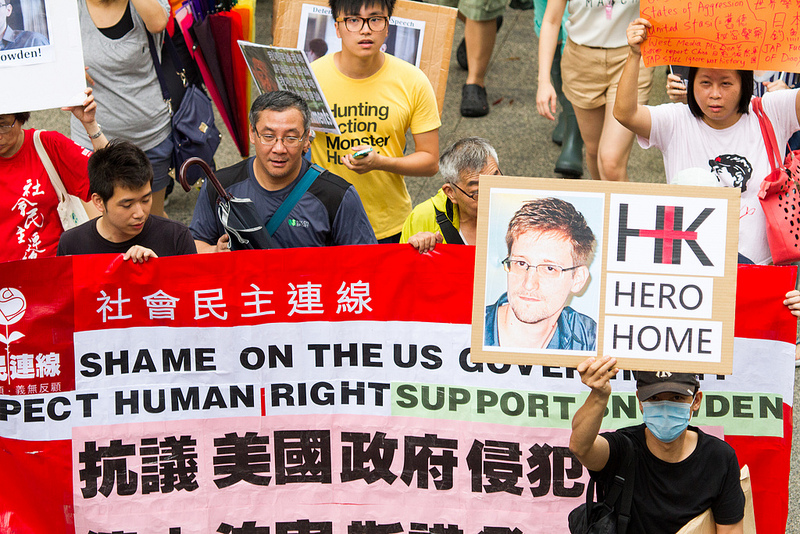 What’s the media’s role with open gov and transparency? (Survey)

Richard Sambrook, a former director of global news at the BBC, is leading a study of the role and attitudes of journalists in government transparency programs. He’s seeking input from media practitioners worldwide. Click here to take the survey.

In the wake of the Bradley Manning conviction for leaking secret US government documents to Wikileaks, and Edward Snowden’s revelations about the US government’s spying activities, discussion of open government may be met in media circles with customary skepticism.

However, there’s no question that support is growing around the world for the principle of greater transparency by governments – and the increased accountability and civic engagement it can deliver.

Demonstrators in Hong Kong march in support of former US government contractor Edward Snowden on June 15, 2013.

The role of the media in this equation – and of free speech – is too often overlooked. But in every aspect of the debate – transparency, citizen engagement and government accountability – the media has a crucial part to play. And data journalism – in all its manifestation – sits at the heart of this.

The Open Government Partnership is a coalition of more than fifty countries signed up to the principles of greater transparency and accountability. But they lacked a media perspective – and as yet the OGP is little understood outside of governments and underreported. So the Omidyar Network has commissioned an independent Media Council to formulate a set of observations and suggestions regarding the relationship between the ‘open’ movement and the media. The council comprises a group of leading media executives and journalists from around the world with a variety of backgrounds and experience who will be critical when necessary, and constructive where possible. This is an area that has received little attention with governments and specialist civil society organizations (CSOs) tending to gain most of the focus.

But the media is in a unique position to further the open agenda. Transparency is only the first step towards the success of openness. Granting access to information is an important moral and legal issue which has seen massive changes in the last fifteen years as governments all over the world have embraced the benefits of publishing their data. What is perhaps forgotten or overlooked too often is that, by itself, transparency isn’t enormously useful.

In theory, access to information will lead to the public interacting with policy more before giving governments massive amounts of feedback that can improve their policies. Unfortunately, the communicative step in the process – getting the information into the public sphere, distilling the most critical elements of it and getting ordinary people interested – has been somewhat overlooked.

Most people don’t have the time or, often, the requisite training to deal with vast quantities of data.

Another issue is that data is often presented in formats that make it difficult to manipulate (most obviously, PDFs) and that push certain agendas. The lack of empirical data about how the public interacts with increased access to data is problematic and should inspire caution. Why should the open movement assume the public will engage with the vast swathes of information?

There should be an integral element that promotes engagement and understanding – and that is where the media could come in.

The media has long served to do the legwork for the general public – not everybody has the time or knowledge to deal with the political updates emerging domestically and internationally so the media does it for them. It cuts an enormous amount of information down to the bits that it feels people need to know about. Informing the public about what their government is up to doesn’t just mean telling them every single thing it does.

There are a number of interesting ways in which the media could contribute to the open movement. One would be improving on delivery of open data campaigns – how can it be visually interesting and useful? The media has a huge lobby with regards to promoting freedom of expression and access to information laws, both of which are key to transparency policies. Finally, media houses are ready to embrace data driven journalism and the open movement is keen to get people engaged with newly public data – it is excellent timing for both.

The Media Council is collecting thoughts on the open movement from media practitioners all over the world. This survey will inform the eventual white paper which the Council will produce for the Open Government Partnership conference in October 2013.

Richard Sambrook is Professor of Journalism and Director of the Centre for Journalism at Cardiff University. He is a former Director of Global News at the BBC where he worked as a journalist for 30 years as a producer, editor and manager.