A set and a commercial star at halftime 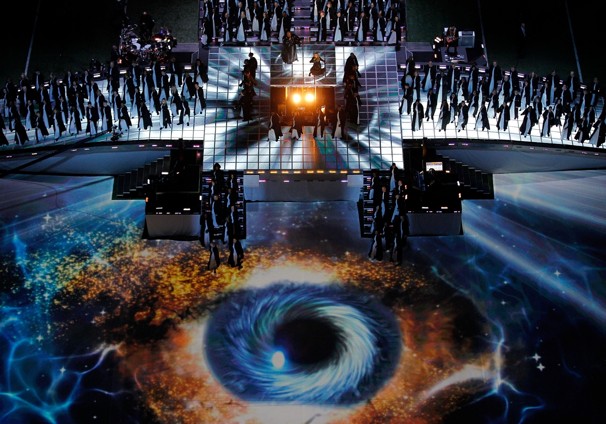 All props to Eli, but the stars of the Super Bowl were a set and an ad.

With more precision than the Giants’ final drive to win the game, the “show-technology” company LMG rolled out nearly 800 custom-constructed LED tiles, built an electronic set over one-third of the football field, and rigged 32 projectors 150 feet above the set in less than seven minutes.

The display of imagery, video and 3D effects that followed — living VOGUE magazine covers, reverberating speakers and a heavenly universe — dazzled. Not even production excess, Madonna, M.I.A.’s middle finger, a pageant wish for “world peace” or something called LMFAO could ruin the twelve-minute media spectacle known as the halftime show.

Then came Clint. “Halftime for the Auto Industry” brought a lump to the throat of this former Detroiter with a gritty, reality metaphor about struggle and perseverance. The spot, more compelling than the half of football that preceded it, roiled the gods of football. Google and You Tube pulled the video after the NFL apparently suffered a concussion, filing a copyright claim that the commercial was political. Can’t have emotional honesty in the Super Bowl; it might draw attention from a violent sport, entertainers shooting us the bird, and wardrobe malfunctions. Fortunately, the video is back up today.

A sequel to the pulsating, Eminem “Imported from Detroit” campaign by Wieden+Kennedy, “Halftime” is rich with the unapologetic this-is-who-we-are-and-this-is-what-we-do attitude that made me proud to work in the Motor City. A pretty good metaphor for America, too, if you want to take it there.