A startup founder pays it forward 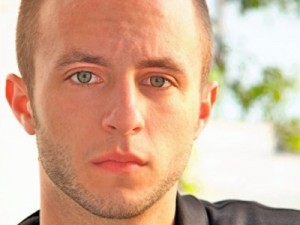 I just read the list of nine intriguing finalists for the upcoming We Media PitchIt Challenge in NYC. It reminded me of the scene in Miami last year when homeboy Lucas Sommer wowed the crowd with a really passionate pitch and snagged the prize.

So what happens when a PitchIt! winner steps off the stage with the big check in hand? If you’re Lucas Sommer, you get right back to working on Audimated, a music web site that helps indie artists and fans share, discover and monetize music.

But Lucas also took time this spring to give back to his home campus, the University of Miami, by visiting with 14 students enrolled in CNJ 595 JX: Entrepreneurial Journalism in the Digital Age.

The newest journalism class at The “U” gives digital natives a chance to research, test and pitch some intriguing business ideas for providing news and information. We’re at the mid-term mark now, and I’m expecting to read some detailed need statements and audience survey drafts by the end of the week. But Lucas was the centerpiece of our second class, when the big ideas hadn’t even been hatched yet.
Lucas, 25, shared perspective and advice on entrepreneurship. He clicked with the students – juniors, seniors and graduate students – in part because they could see in him the kind of success to which they aspire, and because Audimated is right up their alley (“My friend was your featured artist this week!” said one).

But Lucas didn’t glamorize. If you don’t have a passion for your idea, he warned, you’re about to take on a fool’s mission. He described three long years of trial and error, retooling his idea into what would become Audimated. He exuded the determination needed to find investors and convince them – even family and friends – that it’s worthy of their faith and their checks. He gave the students a solid tip: once you’re launched, use surveys to convincingly prove your idea’s merit to investors. And before he left, he shared, free of charge, another killer idea he’d been thinking about for a way to use digital tools to inform and inspire folks. I wish I’d thought of it first.

His visit was a home run, though I knew it would be. I met Lucas the year before while he was senior program coordinator for UM’s successful Launch Pad, the community of student and alumni entrepreneurs that’s becoming a national grass-roots campus model for start-ups. And I’ve found in UM a place to pursue my interests in entrepreneurship, burnished in a career as a newspaper editor and executive and as a vice president at the John S. and James L. Knight Foundation. (Disclosure: Knight is a co-sponsor of the We Media PitchIt Challenge)

The UM class represents a growing commitment at journalism schools across the country to add real entrepreneurial chops to the graduates’ tool kits – right there alongside clear writing, tireless reporting and the First Amendment. In efforts led by numerous We Media veterans, a dozen or so campuses are taking concerted runs at the imaginative reinvention of journalism – and journalism education.

Who knows? One of ‘em might be grooming the next Lucas Sommer. Or Tim Berners-Lee.

—
Winners of the We Media PitchIt Challenge earn $25,000 seed investments to help them turn their ideas into something real. The 2011 finals will take place during the We Media NYC conference on April 6, 2011. Click here to register.

Larry (Bud) Meyer was a Florida newspaper editor and executive for two decades before joining the John S. and James L. Knight Foundation, where he served 14 years as the chief communications strategist and secretary. He has degrees from the Missouri School of Journalism and Harvard’s Kennedy School, and he is past chairman of The Communications Network.