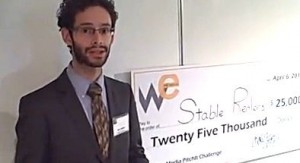 Since my last post I found a developer after months of looking. It was a team of three techies, highly skilled in data scraping, visualization and database architecture. They had everything I needed, and if I went with them, I’d be on my way to launching a great beta site and be dead broke at launch day. Data scraping from very old and finicky databases can cost a lot of money.

But after some helpful conversations with Stowe Boyd (@stoweboyd) and Anil Dash (@anildash), two of the We Media Mentors I was introduced to during the Pitchit Challenge, my new plan is to make a small app that functions for about 50 addresses, and show it off to city agencies in hopes of persuading them to hand it over in a usable form. This allows me to save money otherwise spent on data scraping, and forces me to build relationships that will no doubt prove vital.

The New York City Department of Housing Preservation and Development (HPD) produces this data by taking tenants’ complaints, conducting inspections, issuing violations, and occasionally bringing legal charges against delinquent landlords. Whatever administrative fee is needed for HPD to part with this data must be nothing compared to the costs of scraping the data of 1 million addresses myself.

So, forging this kind of relationship will certainly be an important step for Stable Renters. But the collaboration created will exponentially increase the impact of HPD’s work, allowing New Yorkers of all kinds to make sense of the important datasets they produce and put them to good use every time they rent an apartment.

With NYC’s Road Map for the Digital City and a newly created position of Chief Digital Officer (former We Media contributor @rachelsterne), this type of relationship is not unfathomable. Stable Renters is just one more way for the city to get the maximum value from the wealth of data it produces every day. HPD recently released its Property Registration information (aka the identity of the landlords and management companies for most rental properties) through NYC’s Open Data hub. This information should change next year as the effects begin to be felt by Intro-87, a city ordinance passed in August 2010 that will require landlords to provide real names and addresses for all human (not corporate) stakeholders holding 25% or more of a property. This will make it harder for landlords to hide behind a different corporation name for each building they own, and easier for tenants to find out who actually owns a building. That’ll be a great day for New York City.

Ben Sacks was a 2011 winner of the We Media PitchIt Challenge for a social startup idea to help renters learn more about landlords. In addition to $25,000 in seed capital to help them get going, PitchIt winners gain access to a network of We Media Mentors – and they agree to “pay it forward” by sharing their experiences to help others who follow in their footsteps. The 2012 PitchIt Challenge will open for entries in January – sign up for the We Media email list for early announcements.