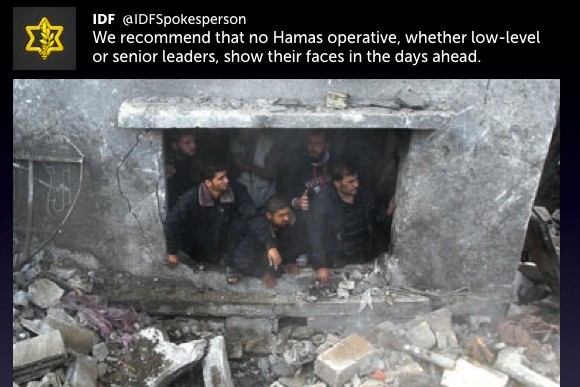 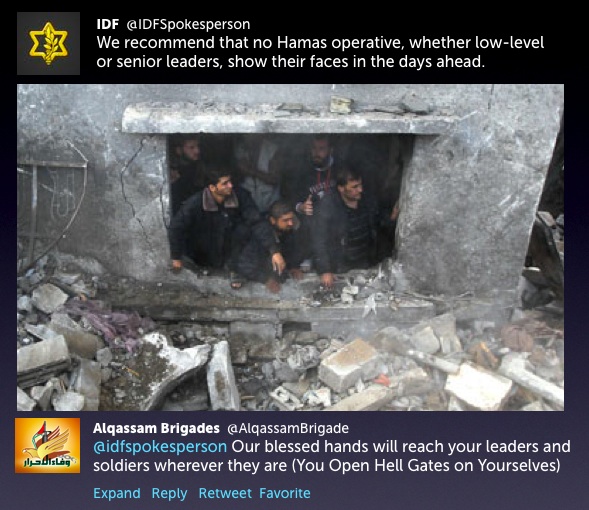 So this is how the world ends. Not with a bang but a tweet.

When the Israel Defense Force (IDF) live tweeted its strike that killed a Hamas leader, it ignited not just a deadly conflict but a Twitter war with frightening implications. Hamas responded by launching rockets into Israel — then its own Twitter feed. A new kind of warfare emerged on common ground called #Gaza, a continuous stream of short reports, links and stories. A few examples of what unfolded:

It is likely that more people followed the conflict between Israelis and Palestinians on social media than on all other forms. A stream of tweets, posts and links provided a graphic, real-time narrative for millions of followers around the world.

The story played out increasingly online, with both sides broadcasting attacks in real time on social media. Israeli officials said there were 44 million cyberattacks on government and security services websites during the Gaza conflict.

Fearing that Israel would shut down access to him and everyone else inside Gaza, blogger Abusalama prepared alternate ways to stay connected by stockpiling SIM cards that would allow his mobile phone to connect to wireless networks in Egypt. He downloaded special software for his smartphone that would allow him to stay online even if local wireless networks were shut down.

It’s not uncommon for governments in the Middle East to shut down telecom networks to control the flow of information during conflicts. The Mubarak regime cut off most Internet and cell service in Egypt uring the Arab Spring uprising there. Last June, Syria’s government shut down Web access to stifle news about escalating protests and violence.

A team of telecom experts funded by the State Department has been building technology that creates a virtual wireless network when a government shuts down or monitors telecommunications systems.

Israel changed the rules. In its calculated attack on Gaza it used social media as a weapon. In perhaps the most chilling communications tactic since Tokyo Rose, it put an information war into the hands of a 26-year-old, snowboarding Belgian

immigrant named Sacha Dratwa. For the past two years Dratwa has led a team of social media soldiers that have shaped the country’s Twitter, Facebook and You Tube presence and turned it into a globally visible weapon of the Israeli military.

“We believe people understand the language of Facebook, the language of Twitter,” Dratwa told Tablet magazine. His team tweeted, for example, about an Israeli girl injured by a Hamas rocket, after a photo of a baby killed by an Israeli missile was posted on Twitter. The IDF also commissioned a Foursquare-style game for frequent visitors to its blog, and it posts YouTube videos of drone strikes and assassinations.

Lt. Dratwa remains remarkably accessible on social media. Just head over to his mostly public Facebook profile to discover that the officer running Israel’s cyberwar is an ordinary guy who likes drinking with his buddies, hitting the slopes and “commanding a cyber propaganda squad.” Since the cease-fire in Gaza, Dratwa now asks for a measure of privacy on his Facebook page: “Due to the amount of public attention I’ve garnered in recent days I have decided to restrict access to my page, in order to protect my privacy and prevent further cynical use of the information therein.”

But is it journalism?
It would be a mistake to confuse the stream of news and information on Twitter as mere propaganda or strident partisanship. When the IDF tweets that it has targeted a city for missile attacks, getting out of town becomes a credible message.

But is it journalism? The question doesn’t come up when your brain is telling your feet to move fast. It does come up, though, if you’re still arguing about what journalism is or what it means in a connected world where almost anyone can be a reporter who commits random acts of journalism.

(What do you think? Use Tok, a new social news app, to add your views …)

The flow of news has changed once again. It is now commonplace for those caught up in the news to provide the first accounts of events unfolding around them. We first reported this phenomena more than a decade ago in a report called We Media that presciently forecast the ability of all citizens, empowered by personal media, to set the agenda for news and play “an active role in the process of collecting, reporting, analyzing and disseminating news and information.”

With the emergence of Twitter as a key medium for news and information about major events – a trend we saw in 2007 when students at Virginia Tech used the new micro-blogging service Twitter to report the news even as they were under siege – actors in news events now take on various roles in a real-time, networked awareness system that offers diverse means to collect, communicate, share and display news and information.

This is not your father’s journalism, or the one-way coverage of past wars, but a new, collective intelligence system we take into the future. Twitter allows a large number of users, including traditional journalists, to communicate with each other simultaneously in real-time based on an asymmetrical relationship between friends and followers. The messages form streams of connected data that provide value both individually and in aggregate.

The social experiene
Sometimes confusing, sometimes messy, the social experience of news manages to fulfill in unexpected ways. The Twitter stream at #Gaza ensured that the world got a real-time picture of what was unfolding. It assumed, correctly I think, that followers understand the roles, perspectives and bias of the reporters. That’s not so different from how news consumers regard stories from, say, the New York Times or Fox News. And, yes, most news consumers in our informed society are smart enough to understand the differences and the nuances that edited or produced news platforms provide.

The other big change: the controls. Twitter turns them off. Informed sources that once channelled information exclusively to reporters of legacy media now communicate directly to and with the public. The public, in turn, responds and contributes. The interaction is potent. It took years for televised images from Vietnam to turn public opinion against that war. On Twitter, pubic opinion ebbs, flows and changes as the news happens.

For journalists who have lost some measure of control, the #Gaza stream raises vexing questions about the ethics and implications of live-tweeting a violent conflict. They worry about the blur between credible sources and partisans with an agenda. They question the democratic, everyone-has-a-voice nature of Twitter, known better for shallow comments or giving voice to strident protesters.

The emergence of a participatory culture, however, challenges past notions of passive media spectatorship. Rather than treating producers, sources and consumers as media players with separate roles, #Gaza shows us how to see them as participants who interact with each other.

Independent journalists have ben particularly effective at assuming multiple roles. By seeding and pruning “following” and “followers” lists on Twitter, reporters such as Jaffa-based Lisa Goldman assemble their own interactive community of thought leaders, expert sources and fellow journalists. On Twitter, Goldman is followed by 9,000 people with as many as 1000 following at any one time. Followers of independent reporters like Goldman can include political leaders such as Israel Prime Minister Benjamin Netanyahu, influential news editors such as The Washington Post’s Marty Baron, and heads of international humanitarian groups such as UNICEF.

Some reporters affiliated with large, international news networks such as the BBC, Al Jazeera and CNN have cultivated large numbers of followers, ostensibly to market their popularity in traditional channels. Gameela Ismail, an Egyptian TV host and politician (remember the multiple roles…) counts 470,000 followers on her Twitter page in Arabic. Others, like “This Week” host George Stephanopolous has more than 564,000 people following ego-lame tweets like this: “Just finished breakfast (flatbread w sour cherries) in Tehran. Saw President Ahmedinejad yesterday. Trying to see Roxana Saberi today.”

Mark Luckie, who left The Washington Post to become manager of journalism and news at Twitter, urges all journalists to use Twitter as reporting tool. Tweet your beats and post content from sources outside their affiliations, he urges. Working in conjunction with Twitter’s Platforms and Analytics team, Luckie combed through thousands of tweets sent by journalists and news brands to discover that “retweets” from other sources tripled engagement, a key online metric.

Legacy publishers are wising up, but still trying to maintain control. The Guardian.com, the online site of the UK’s Guardian newspaper, used a curation tool called Storify to manage its own Twitter stream and link to coverage about Gaza from its reporters.

More
More is coming. Technologies applied throughout the world will accelerate the democratization of media, empowering the rest of the planet. Expect more chaos as we embrace new ways to communicate. History may provide context for the wars we wage and the means we use to try to understand them. It will be up to us to find the common ground of truth. Bang. Tweet.