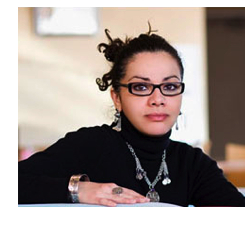 “My birth at the end of July 1967 makes me a child of the naksa, or setback, as the Arab defeat during the June 1967 war with Israel is euphemistically known in Arabic. My parents’ generation grew up high on the Arab nationalism that Egyptian president Gamal Abdel Nasser brandished in the 1950s. But we “Children of the Naksa”, hemmed in by humiliation, have spent so much of our lives uncomfortably stepping into pride’s large, empty shoes.

But here now finally are our children – Generation Facebook – kicking aside the burden of history, determined to show us just how easy it is to tell the dictator it’s time to go.”

This is Mona Eltahawy writing in The Guardian. If you seek meaning from the events in Egypt, then you know her. “An Egyptian from the inside and outside,” she is the voice of a people, an interpreter for Western media.

It’s personal for Ms. Eltahawy. She’ll explain at We Media NYC on Wednesday, April 6 at the Digital Sandbox Events Center. The program features a talented new generation of reporters and innovators redefining news and how we know it through personal brands and social media. Program. Register.

Living in the U.S. for a decade, Ms. Eltahawy draws on her reporting experience as well as her family background in Egypt. With a background in traditional journalism, she’s been a correspondent in Middle East and North Africa for Reuters and other news organizations. But it is on her blog and through Twitter that she has become an authority to which Western media have turned.

In politically-focused analysis, Eltahawy has persuaded CNN to stop using “chaos” and “crisis,” and using “revolt” or “uprising” instead. “Egyptians want to fix Egypt, they don’t want to destroy Egypt,” she said, on air. Less than an hour later, CNN changed its onscreen headline from “chaos in Egypt” to “uprising in Egypt.”

Meet her and learn more at We Media.