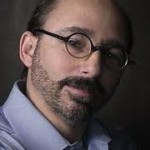 I love the smell of old records. The cardboard sleeves, the vinyl and the memories. I like the sound and the feeling of a rotary phone. And I like thinking back to a time when the web was something we ’surfed.’

Surfing the Web. Ah, back when the waves lapped against the shores and then pulled back. With a rhythm and a volume that was at human scale. Today, no one surfs the Web, we survive it. We tolerate it. We try not to be enveloped by it. Because, the Web no longer operates at human scale. It’s Moore’s Law applied to information.

Which is why I was both charmed and surprised to hear Google’s Dan Russell being interviewed by Leo Laporte on “This Week in Google”. Russell is in charge of “User Happiness” at Google. “Well, you know, people are pretty happy when they’re searching,” Russell said, in describing his role. “That’s one of the reasons Google is where it is. Happiness comes from a lot of things. One thing it comes from is whether or not you get that sense of delight.”

Okay, reality check here. How many of you remember when the Web, and in particular Google, was delightful? I do. I remember Mosaic. I remember when Google was amazing. The Web was seemingly growing volumes of quality content, and Google helped me find it fast. Awesome.

But recently, I find that Google isn’t my first stop when I’m looking for what Jeff Jarvis calls the serendipity of “unexpected relevance.” There are just so many choices, and so many of them that seem to know me better than Google does.

Russell seems to understand this. “If we could read your mind, and help to presage what’s coming next,” he says, “that would be great!”

So while Google is defining ‘delight’ as popping a weather graphic on your screen, users are drowning in a flood of tweets, blog posts, check-ins, and other real-time data that overwhelm comprehension and exhaust users. And it’s clear that Google understands this – with new CEO Larry Page making sweeping changes in the goals and management of the company.

Page is hyper-focused on competing with Facebook in the social sector, recently sending out a memo to employees that ties 25 percent of their annual bonus will be tied to the success of Google’s social strategy in 2011. But after just one week on the job, critics like Computerworld’s Mike Elgan say Google still doesn’t understand what all the fuss is about over at Facebook. ”Google doesn’t seem to understand that Facebook is a party,” says Elgan. ”People prefer Facebook to Google because Facebook is a place they can go to be social. With Google there is no ‘place.’ There is no party. Google’s approach to social isn’t fun.”

Steven Rosenbaum, CEO of Magnify.net, is the author of Curation Nation: How To Win in a World Where Consumers are Creators.