Lessons from a pitch (It) competition

I didn’t win the big prize at the We Media PitchIt! competition, but I walked away with something potentially more valuable: honest and constructive feedback that will help to shape the future trajectory of my project. Here is a quick recap and some lessons learned: 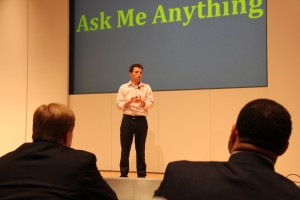 Brian Reich pitches his startup idea at the We Media PitchIt! Challenge April 18, 2012, in McLean, Virginia.

Each of the eight finalists was given eight minutes to present their project, plus another four-or-so minutes for questions from the judges. Of course, eight minutes is more time than you would need to provide a simple elevator pitch, but not enough time to get into sufficient detail about a platform or plan. If you think that preparing for an eight minute pitch simply requires adjusting your cadence, or offering more/less detail, you are wrong. A specialized deck, and script, for that length of a pitch is required. I
settled on 15 slides and finished with 5 seconds to spare – managing mostly even pacing through my key points and still time for a quick back-and-forth with one of the judges.

Questions have many answers

I prepared for the Q&A portion of the competition by anticipating questions that might be posed by the judges and preparing and practicing some stock answers. Still, when my moment in the hot seat arrived I found myself scrambling. When one of the judges asked how I would integrate an existing platform into my plans, I assumed he wanted me to explain how I would make that work. I had an answer for that, as well as an answer for why my plans were superior to the existing options in the marketplace. I mis-read the tone of his question and provided the wrong answer, thus missing an opportunity to clearly distinguish my plans. I didn’t harm my pitch significantly, but I didn’t do myself any favors either.

WeMedia organized a mentoring session for the eight finalists the day before the big
pitch. Everyone went through their presentations and received feedback from a group of startup experts. Nobody performed particularly well during the prep session, mostly the result of nerves. But, every single finalist made substantial improvements to their decks and their overall presentation overnight – showing a capacity to learn and respond to constructive criticism. We were told that the passion and willingness to internalize feedback was a factor in deciding the future potential of all our projects.

Finalists were asked to submit background information in writing before the live We Media event. The judges reviewed all that information closely and discussed the different finalists in advance. Most of the judges reported arriving at the final pitch competition with a sense of which projects were the strongest, but also reported that new information, and the quality of the pitch itself, played a role in changing their ultimate decisions. The details of a startup project evolve so quickly that it can be hard to keep information updated and the focus clear, but knowing in advance just how much the written information informed the final choices probably would have changed the entire process of preparing and presenting when the moment arrived.

If I had been a PitchIt! finalist another year the outcome might have been different. PitchIt! is an idea-competition, designed for relatively early stage startups, but this year’s winners were closer to launch and that was a consideration among the judges. The near-ready startups will almost certainly be able to put both the money and access to
the WeMedia network to better use in the short-term than the projects, mine included, that are still largely in the planning stages. I can’t fault that line of thinking by the judges. And I will be interested to see how the organizers update the criteria for the competition in future years to take that into consideration.

If a couple of small things had gone differently I could easily have walked away with the oversized cardboard check. The money was only a small part of the motivation for entering the competition. The feedback, the validation of my idea and the encouragement – from judges and organizers alike – to focus and discipline myself and accelerate my own plans to advance my project towards launch, will have a far greater impact than anything else.

Brian is Managing Director of little m media which provides strategic guidance and support to organizations around the use of the internet and technology to facilitate communications, engagement, education, and mobilization.