This is quite a group 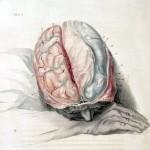 The brainpower gathering for We Media NYC, on April 6th, is off the charts. Here’s a sampling of who will be there:

Seats are still available. If you’d like to join in, click here for more about the program and to register.