We Media PitchIt! competition nets $50,000 for news and music start-ups 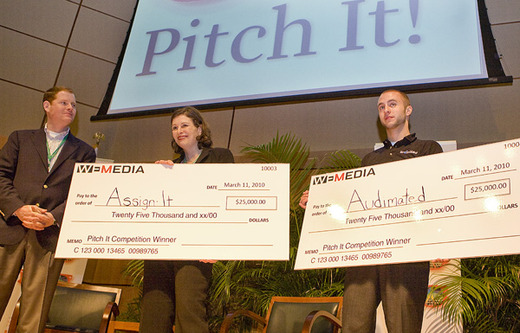 We Media: Pitch It! Awards Presentation from KnightCenter on Vimeo.

AssignIt and Audimated won We Media’s 2010 PitchIt! Challenge March 11 in Miami, beating six other commercial and non-profit groups vying for the $25,000 prizes.

AssignIt CEO and founder Melinda Wittstock said the money “will allow us to do the prototype we need to do to get the support and network we need to make this a real success.”

Wittstock, a former ABC News and BBC staffer and founder of Capitol News Connection, said AssignIt’s aim is to marry technology with the oversight of journalists. Users will set the agenda for journalists who will produce a variety of news, including investigative work. Wittstock plans to launch AssignIt’s first mobile device app in six months, with a goal of operating in cities nationwide within five years.

Lucas Sommer’s Audimated, a late entrant in the competition, will connect musicians and fans, giving both of them opportunity to make money. Sommer is a 2007 graduate of the University of Miami business school – where the eight finalists made their pitches and the winners were announced at the end of We Media’s annual conference there.

Sommer said the prize will “have a tangible effect on everyone in this room, especially myself and the independent artists.”

The other six finalists who made seven-minute pitches Thursday were: Blitz Bazaar, Rate My Water Quality, MiCAST, Stractor, LoudSauce and Citizens Market.

PitchIt!, which started four years ago on a whim as a way to help small entrepreneurs connect with influential attendees of the globally recognized conference and community, expanded this year to include another sponsor, the John S. and James L. Knight Foundation. The competition’s other major partners are the Ethics and Excellence in Journalism Foundation and Ashoka Changemakers. Another first this year: a boot camp for projects not quite ready for the finals.

“We think the future is built on the visions of social and commercial entrepreneurs who are imaging the future for us,” said We Media co-founder Andrew Nachison.

Before the pitching began, last year’s winners reflected on what’s happened since they took home their oversized check.

Ben Berkowitz of SeeClickFix shared some of the things he struggled with a year ago he still struggles with, like getting government to respond.  He’s learned to “really focus your message” and that “the message will shift depending on who your audience is.”

He said he values even getting the chance to make a pitch last year.  “Eight minutes is going to feel really quick; over the next year, you’ll probably never be given eight minutes again.”